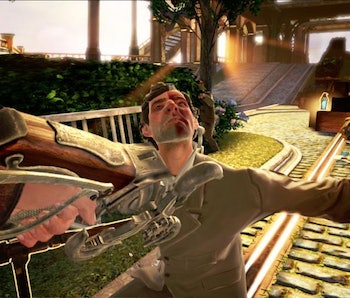 It’s been eight years since we last saw the release of a BioShock game — Infinite took what made the series great and expanded on it, transporting users to a world in the clouds that offered social commentary on issues like race and American exceptionalism.

2K Games, one of several developers for the series, officially announced that a new BioShock title was coming in 2019, but since then it’s been tumbleweeds. This week, some news has come to light that reveals what the new game will be called, a glimpse at the logo, and an internal pitching presentation slide.

Like any premature reveal, the details come courtesy of a Twitter leaker that goes by the name of @oopsleaks. Apparently the next entry to the series will be called BioShock: Isolation. In addition to the title, they also revealed information about the setting for the game (an isolated dystopian city, go figure) and that it will employ Unreal Engine 5. Other details that were covered include a possible announcement date in Q1 2022 and that the game will be developed by Irrational Games.

As pointed out by Dualshockers, @oopsleaks’ posts were corroborated by Ralphs Valve, another leaker that has previously given out details about Modern Warfare (2022).

Game details — Aside from the tweet above, @oppsleaks also revealed what looks like an internal presentation slide meant to pitch the game.

The slide expands on the setting and backdrop in which Isolation may take place. It appears that there will be two cities, with contrasting ideologies. City one is described as “a free and wealthy society led by a successful entrepreneur,” while City two is “an isolated underground city, separated from the upper world, led by a dictator leading a vertical war.” A border allegedly separates the two zones that are located underground from each other.

With all of that being said, you should probably take this leak with a grain of salt as nothing is set in stone until there is official word from the developers themselves. Still, it’s hard not to get at least a little excited, especially given the fact that it’s been a while since any information a new BioShock game has been revealed.