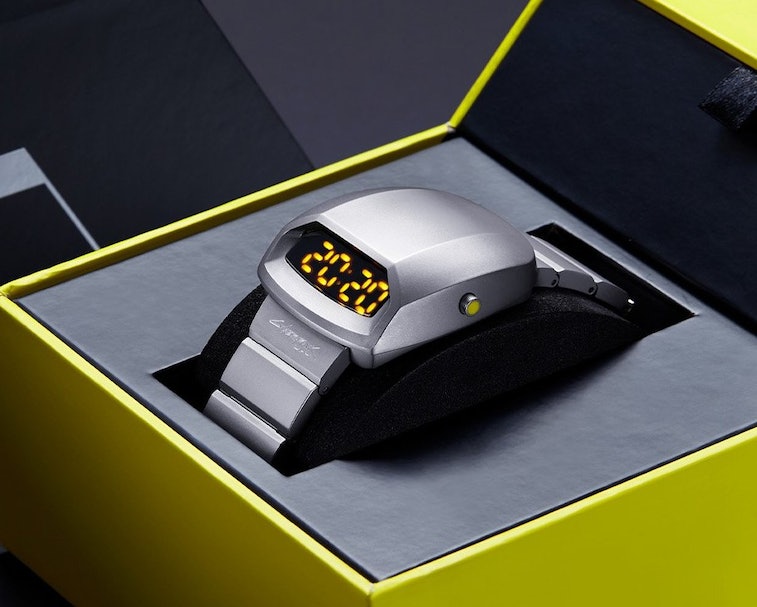 Last year’s most anticipated game, Cyberpunk 2077, became the talk of the town for all the wrong reasons. Between a slew of bugs and issues on PC and an unplayable PS4 version so bad that Sony removed it from its digital store, Cyberpunk 2077’s unfinished state was no exaggeration.

It was not a nice way to cap off the year for us “dear gamers” or the developers who crunched for months to get it out of the door. Rather than haul ass on finishing up DLC and next-gen PS5/Xbox Series X updates that were promised this year, CD Projekt Red would rather you buy a themed watch that — for some inexplicable reason — involves the blockchain.

So instead of doing right by gamers, we’re getting a watch that costs as much as a current-gen console.

Corpo timepiece — The T-2077 is a $500 watch made in collaboration with BŁONIE, a Polish watchmaker. The case and watch strap are both made from titanium, which is an expensive material often used in premium versions of products. The narrow watch face occupies the bottom portion of the watch and is covered in a dark glass that’s coated with sapphire for better resistance against drops. The watch has a water resistance of 5ATM, or 5 atmospheres, which is equal to the pressure you get when diving 50 meters, though that doesn’t mean you can dive 50 meters. Like most simple digital watches, this one runs on a CR2032 battery that should last a few years before being replaced.

On the outside, the titanium case resembles the hood of a car or even the sold-out Cybertruck whistle Elon Musk hocked for a hot second. The watch features minimal nods to Cyberpunk 2077, such as the game’s logo on the watchband and a little bit of yellow on the buttons. It’s a unique-looking watch for sure, but you’re better off with an Apple Watch Series 7 that costs less or buying an actual nice watch that won’t make you look like a dork.

Dumbwatch — Clearly, the T-2077 watch is made for diehard fans of the game, but there’s just one problem: it’s not a smartwatch. The biggest feature is the option between 12 or 24-hour options. For some reason, a watch that’s supposed to represent the cutting edge Night City, a place where you can swap out your limbs for cybernetically enhanced ones, is no more advanced than a $25 Casio digital watch. Even the $65 Bandai Vital Bracelet Digitial Monster tells time, tracks steps, and can raise a freaking Digimon.

Again, CDPR thought about this and figured that instead of adding smart features it would make the watch’s ownership verifiable on the blockchain. I wish I was kidding. The service is provided by Arianee, a company that allows you to claim ownership of your item on its blockchain. How that makes the experience more valuable is beyond me, but if you lose the watch or it gets stolen, then at least you’ll still own it digitally.

Not worth it — Look, Cyberpunk 2077 has come a long way in the year since its release, most recently being a top-played game on Steam and receiving an outpouring of positive reviews. And the game is more playable than it has ever been on PC. That being said, the next-gen versions of the game have taken so long to launch that the consoles are now simply current gen. With another delay, CDPR expects the PS5 and Xbox Series X/S versions will be out by Q1 next year, though we’ve heard that before.

Regardless of the state of the game, the watch isn’t necessarily a bad idea. It looks cool, depending on who you ask, and is made from premium materials, but it offers nothing special in terms of user experience. A game with such over-the-top marketing and in-your-face hype has maybe clouded what we should expect from CDPR, but it’s not this. If you want to really experience the world of Cyberpunk 2077, just play the game, or wait until it’s better — whenever that is.