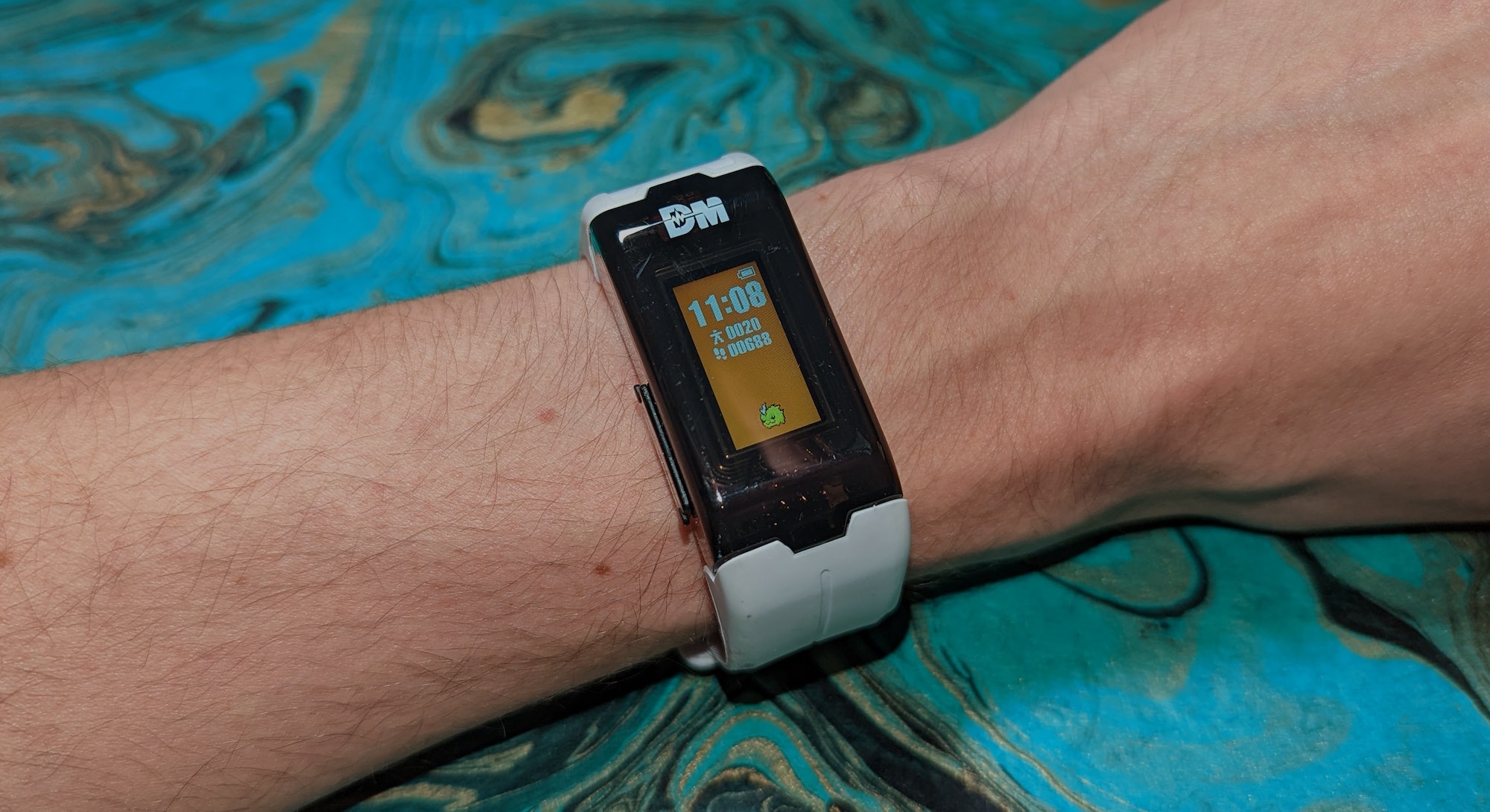 I don’t think I’ll ever recapture the positive vibes I felt that first summer with Pokémon Go.

That’s the closest to a world-uniting, “aliens are visiting earth” type event I think I’ll ever experience. One where everyone I knew, from my college roommates to my middle-aged dad, downloaded the app and ran outside to catch virtual monsters.

The Bandai Vital Bracelet Digital Monster isn’t like those first few perfect months of Pokémon Go, but I think the comparison might be an apt one. Just like the early days of Pokémon Go, the Japanese-only Bandai Vital Bracelet Digital Monster has the nostalgic draw for anyone who grew up with Digimon, and some of the unnecessary, Tamagotchi-esque mechanical complication that makes these tech tie-ins interesting.

The Vital Bracelet isn’t the best step tracker or heart rate monitor — it’s mostly a toy. But figuring out how to make it work is a lot of fun, and might just be compelling enough to pay $65 to import one from Japan.

A unique combination of Tamagotchi and fitness tracker filtered through the world of Digimon. Not the most accurate, but definitely fun.

The Vital Bracelet comes in a couple of different varieties based on what Digimon you want to start with. I have the Impulse City Vital Bracelet which is vaguely electricity-themed and starts with Dokimon (who later becomes Bibimon and Pulsemon).

The Vital Bracelet has a white, plasticky body with a matching, pre-attached, stiff rubber strap. It’s not exactly a thin device –– the heart rate sensor even protrudes beyond the body –– but it’s also not as uncomfortable or cumbersome as you might expect. My sense of what’s annoying to wear is a bit skewed as someone who double-wristed an Apple Watch and Amazon’s Halo band for a better part of a year, but really, it’s not that bad.

The actual screen of the Vital Bracelet is vertical and narrower and smaller than I’d like, but it is pretty bright, which makes the pixelated sprite representations of your Digimon look all the better. The screen is unfortunately easy to scuff –– that plastic does not hold up to much wear in my short time using the bracelet. Because it’s not a touchscreen you interact with the Vital Bracelet via two buttons on the side of the device. It’s easy to forget what these do, and in some cases there is variation. In general, the top button is for rotating through selections, and the bottom one is for confirming them.

Next to those buttons are two ports, one for charging over MicroUSB (the Vital Bracelet charges in around 3-4 hours) and another for inserting DIM (Digimon Identified Memory) Cards, the Vital Bracelet’s method of getting ahold of new digital monsters. As far as I can tell, DIM Cards –– which seem to cost around $15 per card, but are frequently sold in packs of two for around $30 –– mainly unlock the visual aesthetics of different Digimon as opposed to whole new pieces of gameplay. They don’t change what the Vital Bracelet does beyond what Digimon you’re able to hatch and raise, and the particulars of their evolution flowchart. The Vital Bracelet also supports NFC but only seems to use it to transfer monsters to and from a companion mobile app.

Using the Vital Bracelet is a bit like raising a Tamagotchi. Inserting the DIM Card transfers an egg to your bracelet, which hatches and then enters into a complicated flowchart of evolutions (seriously, I don’t think I’d understand any of this without some serious fan labors of love). Pushing your digital friend through various forms is the main reason to wear the Vital Bracelet in the first place. It’s not as hands-on as a Tamagotchi –– there’s no virtual poo to pick up for example –– but watching your Digimon grow in real-time and evolve based on your actions does the same kind of work to endear you to a little virtual creature that a Tamagotchi’s virtual pet care does.

The obstacle to enjoying all of the Digimon content the Vital Bracelet has to offer is the baked-in complexity of the device. This doesn’t fall entirely on the obvious language barrier. The Vital Bracelet is technically a Japanese product, but much of its interface is text-free save for a few instances where the name of your Digimon is left in untranslated katakana. Even the companion mobile app offers an English language option.

The issue is really how complex using the device is if you actually want to use it as intended. The translated user manual/guide is a big help, as are all of the fan-made instructions that help explain Digimon evolution. It’s not ridiculously difficult to understand, you just might not be expecting something like this from a toy or a step-tracker. It takes time. The challenge of figuring out how to evolve my Digimon ended up being appealing to me, but there’s your warning, it won’t be for everyone.

Figuring out how to make it work is a lot of fun.

To understand how exactly to evolve your Dokimon into a Pulsemon you have to understand your Vital value. You gain Vital points by increasing your heart rate, walking more miles, and winning battles with your Digimon. How those different actions actually break down into points varies, and there’s a whole separate set of “missions” that unlock and have their own effect on your Digimon’s evolution.

According to the English translation of the Vital Bracelet’s manual, “The Vital value increases based on your base heartbeat rate and your current heartbeat rate.” So as I’ve come to understand it, the greater the difference between the two numbers, the more points get transferred to your Digimon. For “Miles” or the number of steps you take it’s a bit more straightforward. Fifty “Miles” translates to one Vital point and the bracelet automatically checks your steps every three minutes.

The number of battles your Digimon win also adds to the point total, though it changes depending on the current evolution of your Digimon and your Digimon’s state (Good, Normal, and Bad). Naturally, there’s an elaborate chart for that as well.

Battles are also where the Vital Bracelet’s companion app comes in. The Digital Monster Vital Bracelet Lab app adds another layer of complication. If you transfer your Digimon to the app over NFC (just by putting the app and your bracelet in a transfer mode and touching the two devices together) you can unlock a virtual currency for unlocking items and boosts for your Digimon, view their stats, and battle. The battle mechanics are a pretty straightforward timing minigame, but it’s not without its small challenges.

Missions are the final way to earn Vital points, and also the closest the Vital Bracelet gets to actually directing how you move and workout while wearing your Digimon on your wrist. What you need to do to complete each mission varies, in some cases it’s walking a certain number of steps, hitting a specific heart rate, doing a certain number of basic exercises like squats or pushups, or some combination of all three. I’m not convinced the Vital Bracelet is actually advanced enough to even know if you’re actually doing a push-up, but the fact it pretends is fun and I was happy to play along. For a child, the Vital Bracelet is a brilliant way to gamify exercise; for adults, especially Digimon fans, it might take more motivation. There are new missions daily, which means there’s plenty of opportunities for the Vital bracelet to trick you into exercising as well.

The Vital Bracelet is surprisingly complicated and obtuse, entirely separate from having to deal with what might not be a perfect translation of a user guide. That quality is also what makes it interesting. Sure, seeing recognizable Digimon evolutions gave me a satisfying dose of nostalgia, but it was navigating the Vital Bracelet’s various paths for digital monster evolution with the guidance of fan-made guides that stuck with me.

The Vital Bracelet is really cool.

The Bandai Vital Bracelet Digital Monster isn’t going to replace anyone’s Apple Watch or Fitbit, and you might get more nostalgic pleasure out of watching Digimon: The Movie (if I may suggest an AMV). But as a realization of Digimon’s bizarre spin on Pokémon and Tamagotchi, where all of the digital elements are literal instead of a necessary suspension of disbelief, the Vital Bracelet is really cool — and honestly inexpensive. A toy, but one that offers a lot of room to experiment and explore.