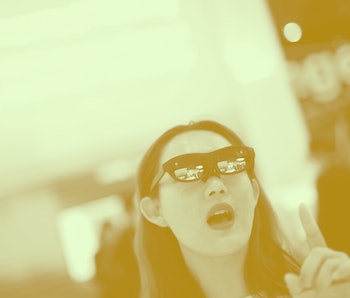 Epic Games would love for you to believe it’s just one “Little Guy” trying to stick it to the Goliaths over at Apple for the Big Tech company’s monopolistic hold on the industry. To the Fortnite maker’s credit, Apple definitely fits that bill... but don’t for a moment buy into the idea that Epic won’t sue you into oblivion for its own perceived slights. Take the lawsuit filed this past Friday against the China-based smart glasses developer, Nreal, for purported trademark infringement. According to Epic Games, it’s “no coincidence” that the company’s name resembles its Unreal Engine moniker, and it hopes a judge will agree. If successful, Epic hopes to be awarded both damages, as well as prevent Nreal from securing a trademark in the U.S.

This isn’t their first spat over specs — Epic and Nreal are no strangers to legal disputes, either. Rather, this (like the Apple situation) is a long-running feud between the companies, stemming from a similar attempt on Epic’s part to block the trademark application of Nreal back in 2018. While attempts were made at an out-of-court settlement, Epic claims the talks were ultimately “fruitless,” hence the current lawsuit.

Epic might have a legal leg to stand on — Despite it being somewhat ludicrous at face value, Epic Games might have some merit in the eyes of the court. According to the suit filed last week, Nreal’s website reportedly “lists Epic’s Unreal Engine as one of three development platforms to be available for developers to create content for Nreal’s glasses,” and has already developed and sells a game (the admittedly fun-looking Nreal Tower) to use with its Nreal Light line of AR glasses. “Nreal is willfully trading off Epic’s rights, causing confusion, and acting with callous disregard for Epic’s prior rights,” reads the filing, in typically dramatic legal fashion.

A spokesperson for Nreal provided Input with the following statement in response: "Nreal is an innovative and growing startup that is setting a new standard for augmented reality. Recognized as a ground-breaking company among both consumers and developers, Nreal has developed a reputation as the leading hardware manufacturer of mixed reality and augmented reality glasses currently sold in Asia and Europe. We're aware of the litigation that has been filed by Epic. We respect intellectual property rights, but we believe that this lawsuit lacks merit and plan to defend vigorously against the claims brought by Epic.”

Planning for the AR future — It’s not only the Unreal Engine name that’s got Epic pissed at Nreal: it’s the company’s products. As multiple sources have noted in the past, while Epic hasn’t announced any actual hardware yet, its own legal filings indicate the gaming company is definitely planning on some kind of expansion into augmented reality down the line.

“Epic expects Unreal Engine to feature prominently in the creation of a virtual metaverse, a real time three-dimensional social platform where friends meet to interact and have enjoyable experiences,” reads the lawsuit, reasoning that this eventual product and its name will “confuse” customers. While we imagine most people will be able to tell the two companies apart, Epic is definitely banking on the courts thinking otherwise.

More like this
Matt Wille
5.7.2022 12:30 PM
Guides
How to play 'Fortnite' on your iPhone with Xbox Cloud Gaming
Steven Wright
5.18.2022 10:00 PM
(Don't) build me up
It's normal to get into Fortnite as an adult, actually
Steven Wright
6 hours ago
Gaming
Destiny 2 studio decries racism in gaming after Buffalo attack