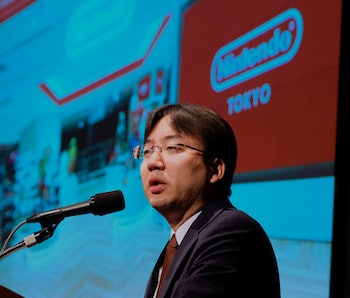 Nintendo announced this morning that it will stream a 50-minute Direct presentation on February 17 at 5 p.m. E.T. — the longest Nintendo Direct we’ve had to look forward to in a very long time. The presentation will focus mostly on Super Smash Bros. Ultimate and games being released for the Switch in the first half of 2021, according to the company.

As you might expect, the announcement has set the internet ablaze with theories about what, exactly, Nintendo has in store for fans tomorrow. Nintendo’s Direct series hasn’t been sparse, per se, but the company has chosen for the past year or so to mostly make small-fry announcements with short presentations. These Direct Minis have mostly been utilized as announcements for smaller titles and updates to existing games.

The long runtime and overall lack of detail are just ripe for speculation — which is exactly the kind of healthy hype Nintendo always hopes for. We can only hope the actual announcement lives up to the pre-event excitement.

A lot can happen in 50 minutes — To the untrained eye, a 50-minute gaming presentation might seem like not much to get excited about. But Nintendo fans know better than that.

Nintendo has used its Direct series since late 2011 to announce forthcoming game releases. In the intervening decade, Directs have become Nintendo’s most, well, direct connection to consumers: a stage upon which the company can keep fans updated and generate enthusiasm for what’s to come.

Last year, though, fans dealt with a dearth of general news from Nintendo’s Direct events. Nintendo chose a “Direct Mini” format for most of its presentations last year, with far less information and shorter runtimes. Sure, we got news about incoming Super Smash Bros. Ultimate characters and indie games that way, but world-shaking announcements they were not. We can only survive on Super Mario reboots for so long.

Zelda? Pokémon? — Your guess is as good as ours when it comes to figuring out what, exactly, Nintendo plans to announce tomorrow (beyond more Super Smash Bros. characters, of course). Fortunately enough, the guessing game is almost as exciting as the Direct itself.

One popular theory circulating on social media is that Nintendo will spend a fair amount of tomorrow’s Direct on the Legend of Zelda franchise. This year will be the series’ 35th anniversary, and some expect Nintendo to announce a repackaging of old Zelda games for the Switch. We could also see updates about the follow-up to 2017’s hit Breath of the Wild.

Still others think we’re in for some Pokémon-related news. This year marks the 25th anniversary of the series — and though we’ve seen some pretty sweet collabs to mark that birthday, Nintendo has been suspiciously quiet about game releases for the series. There’s no way Pokémon Snap is the only release Nintendo has planned for sure a huge anniversary.

If there’s anything we know for sure, it’s that Nintendo will focus tomorrow’s Direct on stoking the flames of intense nostalgia. And, as always, it’ll work. Time to start saving up.