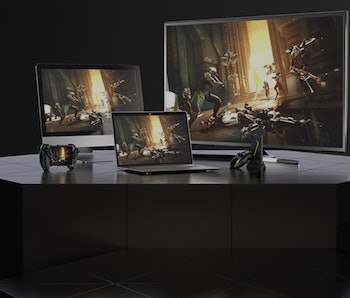 Nvidia’s cloud-based gaming service, GeForce Now, launched widely today, and early reviews suggest it might just give Google’s Stadia a run for its money. Upon launch, the service already has an inexpensive entry subscription fee, low streaming overhead for your network, and compatibility on Mac, Windows, and Android devices. So it’s pretty much the exact opposite of Stadia’s feature-lacking launch.

For an undisclosed limited amount of time, users can sign up for a “Founders” pass for just $5 per month. GeForce Now also offers an unlimited number of hour-long streams for free — you don’t even need to put in a credit card number.

Bring Your Own Games — Nvidia’s gaming service differs from Stadia and other cloud-based offerings in a major way: it accesses your existing catalog of PC games for use anywhere at any time. That means you don’t need to buy anything new to use GeForce Now. Instead, users can connect a GeForce Now account to Battle.net, the Epic Games Store, Uplay, and Steam for game access. The cloud service can even sync your old save files to be accessed anywhere.

There's at least one catch, though — GeForce Now makes claims that it can be streamed anywhere. That’s not exactly true. You’ll need a pretty excellent internet connection with a modern router setup to stream games without a catch — Nvidia suggests 50 Mbps for top quality, which is 1080p60. There’s no 4K option for those serious about immersive quality. So yes, you can play your games from your cheap, old Windows laptop, but only if you’re connecting it to a top-notch internet network.

While we’re talking about catches: there’s no planned support for iPhones or iPads at the moment. That could be a major selling point for Apple-based gamers. Also, a fair number of popular games aren’t available for streaming just yet, such as Grand Theft Auto V and Monster Hunter World. Oh, and gaming sessions are capped at six hours each.

Is streaming the future? — It’s becoming increasingly obvious that console-makers believe streaming is the next wide battlefront for gaming consoles. Microsoft is testing its own version of console streaming for the Xbox, and Sony’s PlayStation Now uses a subscription-based model for unlimited access to 80 PlayStation games. And Google is working on making Stadia more accessible for developers.

So far, Nvidia’s streaming model seems the most user-friendly: a low entry cost and no dedicated hardware? Sign me up.