“Paid titles should not introduce advertising. It is wildly unacceptable to do so months after purchase.” 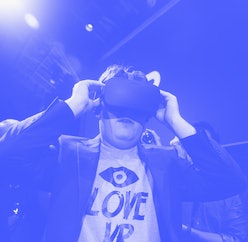 Well, that was fast. Less than a week after Facebook began running advertisements in Oculus apps and games, the pilot program has already hit a significant snag. Resolution Games, developer of the Oculus game Blaston, pulled its experimental ads from the program yesterday (h/t Engadget). The company says it realized “Blaston isn’t the best fit for this type of advertising test.”

Resolution did not offer much detail about its decision to pull the ads other than that it had listened to player feedback. In a second tweet from the Blaston account, Resolution did specify that it’s not counting the Oculus ad program out completely — the company might move the test to its free game, Bait!, instead.

The Twitter community has reacted kindly to the decision, especially once Resolution mentioned that ads might come to free-to-play games instead. Digital ads are rare in paid games; it’s no surprise gamers did not react kindly here. It’s difficult to say whether or not this will present a genuine setback for Oculus’ still-developing ad program. Better for Oculus and Resolution to learn how players feel about these ads before the program launches in full.

Outright anger — Resolution Games asked Blaston players to sound off with their honest opinions about the ad program — and by all accounts got what it asked for. Upload VR reports that, beyond leaving feedback in the company’s Discord server, players left a slew of horrible reviews on the game’s Oculus Store and Steam listings not long after the ad trial began.

“Paid titles should not introduce advertising,” one reviewer wrote (with more than 100 upvotes). “It is wildly unacceptable to do so months after purchase.”

Tommy Palm, CEO of Resolution Games, reportedly sent out an email to customers letting them know their voices had been heard. “At Resolution Games, any integration we do first and foremost takes into account the players and their gameplay experiences,” the email stated. “This is all valuable information that will be taken into consideration when the small test begins later this summer.”

Narrowing the field — It’s very understandable that players would react poorly to advertisements being served in a paid game, especially one that’s never included ads before. As far as feedback goes, the outrage is a great indicator of how much (read: how very little) gamers are willing to put up with in their paid games.

Facebook is hopeful that it can expand its ludicrously lucrative ad empire to the Oculus system, too. The social media giant posits Oculus ads as beneficial for developers — but of course it’s Facebook’s own revenues that come first. With consumers more aware (and warier) of ads than ever, that initiative might be more troublesome than Facebook initially imagined.