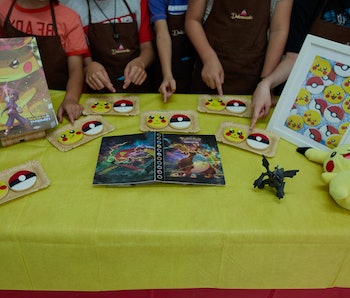 Today the Pokémon company announced its partnering with Universal Studios Japan (USJ), which is located in Osaka, which sounds like a match made in heaven to us. In the official press release the joint venture was described as a “creative alliance to develop new interactive entertainment combining innovative technology and extraordinary creativity.” It went on to confirm some information about a potential Pokémon theme park — “The real and virtual worlds will come together creating a new revolutionary theme park experience.”

The idea of a permanent experiential site for a Pokémon themed-world is the latest development for the iconic brand, which is set to put out a re-release of the 2006 Diamond / Pearl versions later in November. Brilliant Diamond and Shining Pearl are just the first dominos to fall in what should be a prolific period, what with Pokémon Arceus set to drop in early 2022. And while an official announcement for a theme park at USJ has yet to be made, the partnership sure seems to be an unofficial nod towards its eventual opening.

“The incredible team at Universal Studios Japan have the creative vision and leading expertise in world-class theme park technology to imagine a uniquely Pokémon experience,” noted Tsunekazu Ishihara, the president and CEO of the Pokémon in the release. “This strategic alliance with Universal Studios Japan reflects our commitment to continue delivering the joy of Pokémon in ever evolving ways for years to come.”

Why didn’t I think of that? — Considering Pokémon has been a beloved franchise for 25 years, you’d figure that a physical theme park would have been an idea thrown around at a board meeting at some point. And it sort of has been — earlier this summer Pokémon Wonder, a 48,000-square foot forest filled with natural splendor and pocket monsters opened to the public. The enclosure is located in Inagi City and will be open to visitors through April 2022.

Earlier in March 2005, a Pokémon theme park was opened in Aichi, Japan but only ran through September of the same year. The location included themed rides, a restaurant, and even a nightclub.

It looks like after 17 years we will get another chance at a Pokémon theme park. Which suggests we best start saving for our tickets to Japan now.