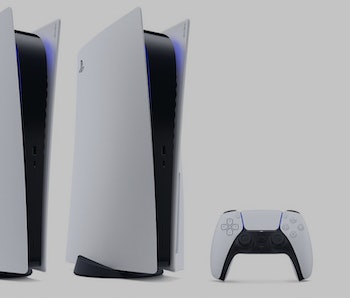 Pre-orders opened up for the Playstation 5 last week and were snatched up quicker than we were to start making fun of the design. If you were left empty-handed, you may have been considering the inherent unfairness of your existence or, even worse, picking up a console for an inflated price on the resale market. But today we tell you to pick yourself back up because you're getting another chance.

GameStop has announced it'll open another round of pre-orders for the Playstation 5 today online and in stores. The retailer hasn't divulged the exact time however, so you may want to turn on tweet notifications for GameStop and/or compulsively hit refresh on its site. And in the meantime, rush out to your nearest store for another bid to tempt fate in your favor.

Let's rehash the details — The Playstation 5 is due to arrive November 12. Pricing is set at $499, going head to head with Xbox Series X ($499). Unlike Microsoft, Sony isn't making any financing offers available for the console. But as we've become used to, the Playstation still has the upper hand when it comes to exclusive releases. Announced titles that'll only be available for PS5 include Marvel's Spider-Man: Miles Morales, Deathloop, Demon's Souls, Destruction AllStars, Rachet and Clank: Rift Apart, Ghostwire: Tokyo, Gran Turismo 7, and Horizon: Forbidden West.

If you don't need the disk drive on your Playstation 5, that'll save you $100 from the base price. On the accessories front, Sony will offer a charging station for your DualSense controller, a Pulse 3D wireless headset, media remote, and HD camera.

But before you get ahead of yourself, let's focus on making the console your own. Godspeed in your race against other hungry gamers today.