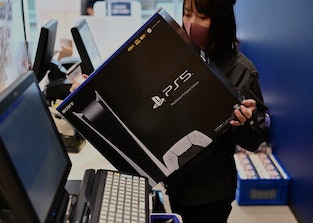 Total sales for the PS5.

As the current fiscal quarter comes to a close, we’re beginning to see earnings reports trickle in. Today, Sony published its report, which showed a jump in PlayStation 5 sales compared with last quarter. Despite the fact that getting your hands on a PS5 remains difficult, the company moved 3.3 million units in this recent quarter, up from 2.2 million units sold last quarter. PS5 sales had already reached 10 million towards the end of the summer, which made the next-gen device Sony’s fastest-selling console of all time.

At its current sales rate, the PS5 is outpacing its predecessor, the PS4, which suffered a noticeable decrease this past quarter — from close a half million units sold in Q1 to 200,000 in Q2. This reduction makes sense given that people are gobbling up PS5s as the console generation shifts. For what it’s worth, the PS4 has moved 116.6 million units since releasing in North America in late 2013.

As far as shortages go, the PS5 isn’t as gridlocked as Nvidia’s GPU production, which is estimated to continue experiencing a dearth of supply for the majority of 2022. Those still on the lookout for RTX 3080 cards will probably have better luck accessing one through the cloud than securing a physical one. Sony, on the other hand, apparently has enough components to produce and sell up to 22.6 million PS5s by March 2022.

A year in — We are close to the one-year anniversary of the PS5’s release, which officially debuted on November 12, 2020. If it weren’t for all of the production issues, it’s possible Sony could’ve had even higher sales numbers — the demand was surely there. Never forget that around the pre-sale period, resellers were moving PS5s at exorbitantly high mark-up rates.

While the PS5 certainly offers a beautiful aesthetic experience, there are still aspects we feel it could improve on — starting with a more stable connection to Wi-Fi. I was hoping to get one a year after the fact, assuming that the price might come down, but it doesn’t look like that will happen anytime soon. For those aiming to secure one in the coming months, good luck!