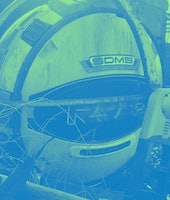 The total number of R360 cabinets ever manufactured by Sega.

From the 1980's all the way through to the early 2000's, countless over-the-top gaming rigs could be found in malls, movie theaters, and bowling alleys across the land... but alas, we are long past the age of ridiculous, garish, completely badass arcade cabinets being commonplace. Now, they're relegated to being props in movies, or in one case, ominous reminders of our growing proximity to potentially world-ending events.

While consoles and gaming PCs have largely replaced the public, quarter-a-play machines of our youth (for the most part), there will always exist a dedicated fan base to these relics of electronic entertainment. And of all the various models out there, the Sega R360 still attracts a particularly diehard group of admirers. Released in the late eighties, the nausea-inducing, gyroscopic R360 only supported two game titles and was limited to a run of 200 units, so, of course, it's developed a bit of a reputation for arcade aficionados. Still, we don't think anyone was quite prepared for the discovery of a lost, derelict R360 just chilling in the middle of an Irish farm acreage. It's pretty badass, albeit a jarring and strangely unnerving sight.

Unsalvageable, but still very intriguing — The lucky (unlucky?) discoverer, Lee Peters, recently posted to Facebook about his encounter with the derelict R360 cabinet sitting creepily on some farmland in the middle of Northern Ireland, near Belfast. "It was apparently the centerpiece of a nearby arcade in its prime, before being shuffled off onto the farm for storage by its owner, who never returned to pick it up," explained Kotaku, which in all honestly sounds like the plot of a pretty good Pixar movie.

While it's pretty safe to say that this particular R360 corpse is beyond hope of repair, Peters did mention in another Facebook post that he intends to return to the site with a truck to haul away the remains. Unfortunately, a rebooted line of R360s feels unlikely at the moment, but with rumors of a Dreamcast Mini in our future, anything is possible.