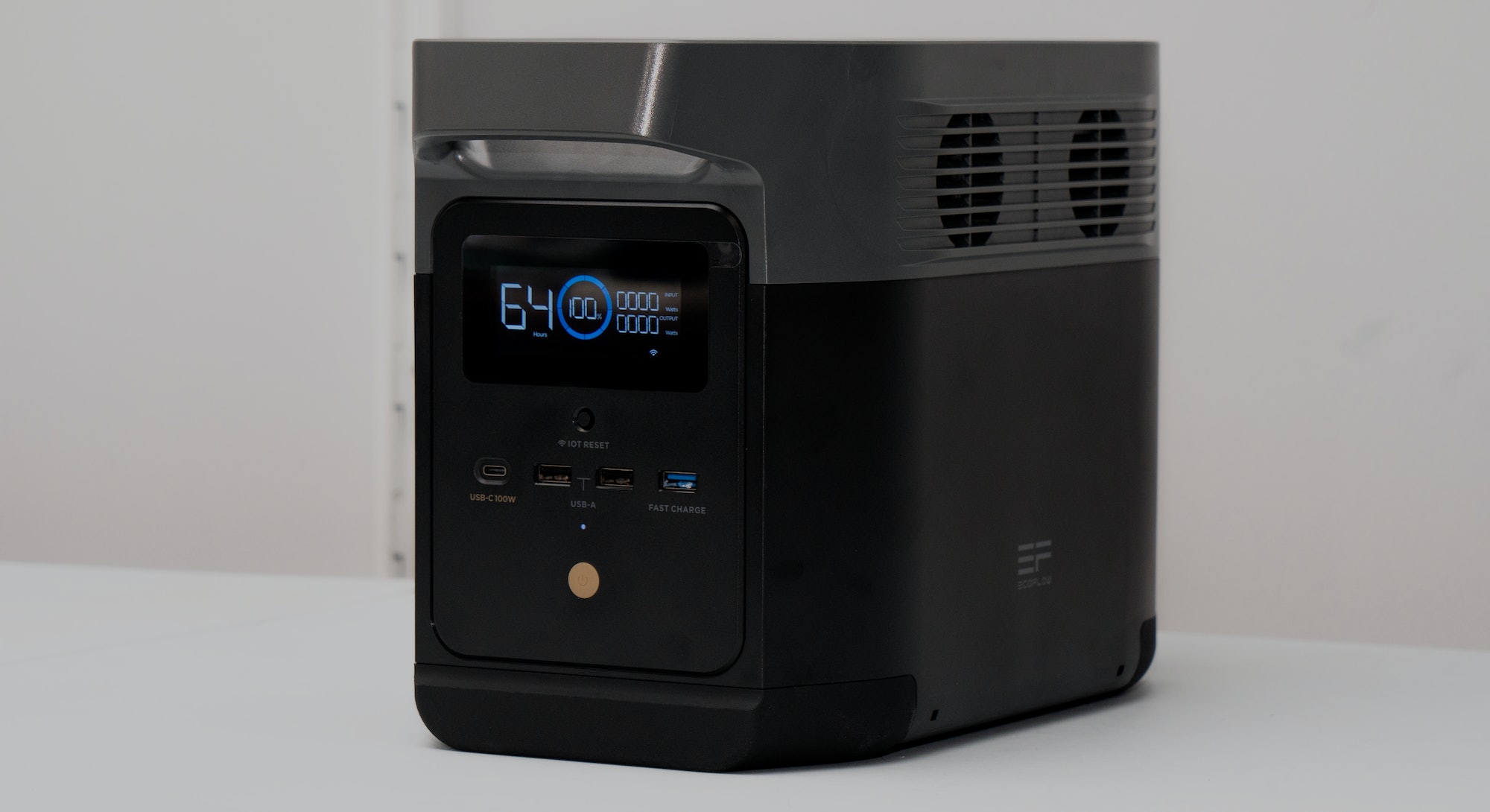 There are a lot of use cases for portable power stations, or solar generators as they’re sometimes called.

Some people are looking for something they can use in an emergency, while others want something that they can take camping for the weekend. Today we’re going to talk about EcoFlow’s Delta Mini power station. It has almost as much capacity as the Jackery 1,000 but is much smaller, and more importantly, it has some pretty advanced power management circuitry that puts it in the same league as much more expensive devices.

A small-but-powerful portable power station with 882Wh of capacity.

Unless you already have a power station, it’s actually really hard to estimate how much power you need. These batteries are measured in watt-hours, which is just load (watts) divided by time (hours). This means the Delta Mini can theoretically put out 882 watts for one hour or 1 watt for 882 hours.

How much capacity does it really have?

Now comes the fun part: testing the actual capacity. Why do we do this? For one thing, it’s just fun to charge up a battery and then discharge it completely (for science). But also: some manufacturers like to exaggerate their capacity rating while others actually understate the capacity in order to compensate for the natural degradation of the cells over time.

So I charged up the Delta Mini to 100 percent, hooked up a Kill-A-Watt to the AC port, and then flicked on my heatgun on low power. It drew a nice, consistent 400 watts, making it easy to keep track of the battery as it ticks down.

With the heatgun, I was able to get 770Wh out of the Delta Mini, which is right on target when you take into account the penalty for converting DC to AC. I also measured how much power it took to charge the Delta Mini via AC, and the Kill-A-Watt measured 1.01kWh. This also makes sense; fast charging does throw off a lot of waste heat.

One thing I noticed while capacity-testing the battery was that, on the first discharge, the battery said that it was at 1 percent even though it had about 30 percent capacity remaining. Once it was fully drained and recharged, the next time I ran it down the meter was able to accurately measure the remaining capacity.

On paper, the Delta Mini can pump out 1,400 watts continuously, which is quite a bit. It ranks up there with the Goal Zero Yeti 1000X, which can produce 1,500 watts of continuous AC, but the Goal Zero is more expensive at $1,399.

In my testing, I was able to run the aforementioned air conditioner, heatgun, plus an electric blower I have in my toolbox, all at the same time. These loads together added up to between 1,600 and 1,800 watts, well above the rated 1,400 watts of the Delta Mini. And this wasn’t just for a few seconds, this was continuous for about 10 minutes.

Obviously, I wouldn’t recommend running any inverter above its rated capacity for long periods of time, but I have to hand it to EcoFlow for really delivering the goods here.

For home users, the Delta Mini’s DC outputs probably won’t attract much attention. But for van life and RV purposes, the DC outputs get a lot of use with things like 12v mini fridges and other mobile appliances. The 12v cigarette plug can do 126 watts, which might be cutting it close for some mini fridges.

The situation around the front of the device is thankfully a bit better. EcoFlow has provided a full 100-watt USB-C port on the Delta Mini, meaning that even the most power-hungry laptops will be able to run on the battery without losing internal charge over time. I actually don’t have a monster laptop to test this with, but I can confirm that my little 13-inch Intel MacBook Pro was able to charge at a zippy 45 watts.

Now to get to the good stuff. As I wrote in my Jackery 1,000 review, charging speed is critical for power stations. Goal Zero’s Yeti 1500X takes nine hours to recharge with the default 120W charger. By comparison, EcoFlow’s Delta Mini recharges in a little over 1.5 hours.

To do that, you need to hook up the Delta Mini directly to AC power with the provided charging cord. On the back of the unit, there’s a switch that enables and disables fast charging. When this mode is enabled, the Delta Mini can soak up to 900 watts of power from the wall, which is pretty incredible.

But AC isn’t the only way to charge the Delta Mini; it also comes with a car charger and an MC4 cable for solar panels. The car charger, in particular, is a nice pack-in from EcoFlow because it helps newbie vanlifers keep their batteries topped up, among other things. Goal Zero charges $39.95 for its car charger, so this saves you a nice chunk of change.

Unfortunately, it seems like the Delta Mini is capped at 300 watts of solar charging capacity or around 100 watts from the car charger. This is alright, but it limits the viability of the Delta Mini for vanlife uses. That said, EcoFlow would likely point you toward its Delta Max and Delta Pro power stations for that.

The Delta Mini is housed completely in plastic, but that doesn’t mean it’s not an absolute unit, because it is. This thing weighs in at 23.6 lbs, or about eight pounds lighter than the Goal Zero Yeti 1000X, its closest competitor.

Overall the unit is very stiff, and I think it could take a beating, though perhaps not quite as much of a beating as a Goal Zero Yeti.

EcoFlow has gone with an interesting port configuration with the Delta series: there are limited ports on the front, like USB-A and USB-C, but the unit is longer than it is wide, and all the heavy-duty ports are on the back. This follows the design principles of the EcoFlow Delta Pro with its extra batteries or gasoline generator, which would sit on either side of the main unit. I like it, it’s very tidy.

Like I mentioned above, it is pretty difficult to estimate how much power you actually need, so an opportunity to expand the capacity of your power station provides a little bit of futureproofing. The Delta Mini isn’t expandable like EcoFlow’s Delta Max and the Delta Pro, which both have optional add-on batteries that you can connect to the main units.

To be fair, though, I’m not aware of any power stations in the roughly 1,000Wh capacity range that have substantive expansion options. Goal Zero has its lead-acid Home Energy Kit, but at this point, it’s probably better to invest in lithium-ion batteries given the price, lifespan, and power density.

Despite its attractive $999 price tag, the Delta Mini is not ideal for vanlife unless you’re keeping things very low-key. It mainly comes down to the limited 300-watt solar charging capacity as mentioned above. If you kept your usage minimal (i.e. not using a 45-watt laptop all day like I did while I was traveling), you could probably make it work on sunny days (assuming you have some solar panels). But I can tell you from personal experience that a string of cloudy days can really compound, and that’s when the extra capacity of larger units comes into play.

Around the house / garage

This is where the Delta Mini excels mightily. The unit’s small size, light weight, and big handles make it very easy to scoop up and move around the house or garage. Plus, a 1,400-watt inverter means that you’ll be able to use the Delta Mini to power a pretty large selection of all but the most demanding power tools.

I think this aspect — the ability to move this battery anywhere around the workshop — is severely underrated. Begone, extension cord; small power stations are my new best friend.

This is an interesting one. On the one hand, the Delta Mini doesn’t have enough capacity to serve as a whole-home backup battery — you’ll want to look at the Delta Max, the Delta Pro, or the Goal Zero Yeti 3000X or 6000X for that. So if you live somewhere with a chronic blackout problem, this unit won’t quite make the cut.

But on the other hand, the Delta Mini’s small size and ultra-fast built-in charging flips that on its head. In an emergency, you could drive or bike to somewhere with power and charge up the whole unit in 1.6 hours. Sure, it’s not as fast as filling up a jerry can for a gas generator, but it’s something.

One other thing to note here: you can use the Delta Mini as a sort of uninterruptible power supply as long as your load is below 800-ish watts. This probably isn’t the best idea, because there’s a 30-40 watt overhead if you do this, but I did run my PC off of the Delta Mini and it will switch over to battery power when the plug is pulled without a hitch.

Should you buy it?

TLDR: Yes. There really aren’t any glaring flaws with EcoFlow’s Delta Mini. The price point is right, the AC output delivers, the AC fast charging is a game changer, and even the EcoFlow app is pretty good.

All that being said, you can sometimes find EcoFlow’s slightly larger Delta power station with 1,260Wh of capacity for just over $1,000, which is honestly a steal. But if you’re looking for something powerful and truly portable, the Delta Mini is absolutely the power station to get.