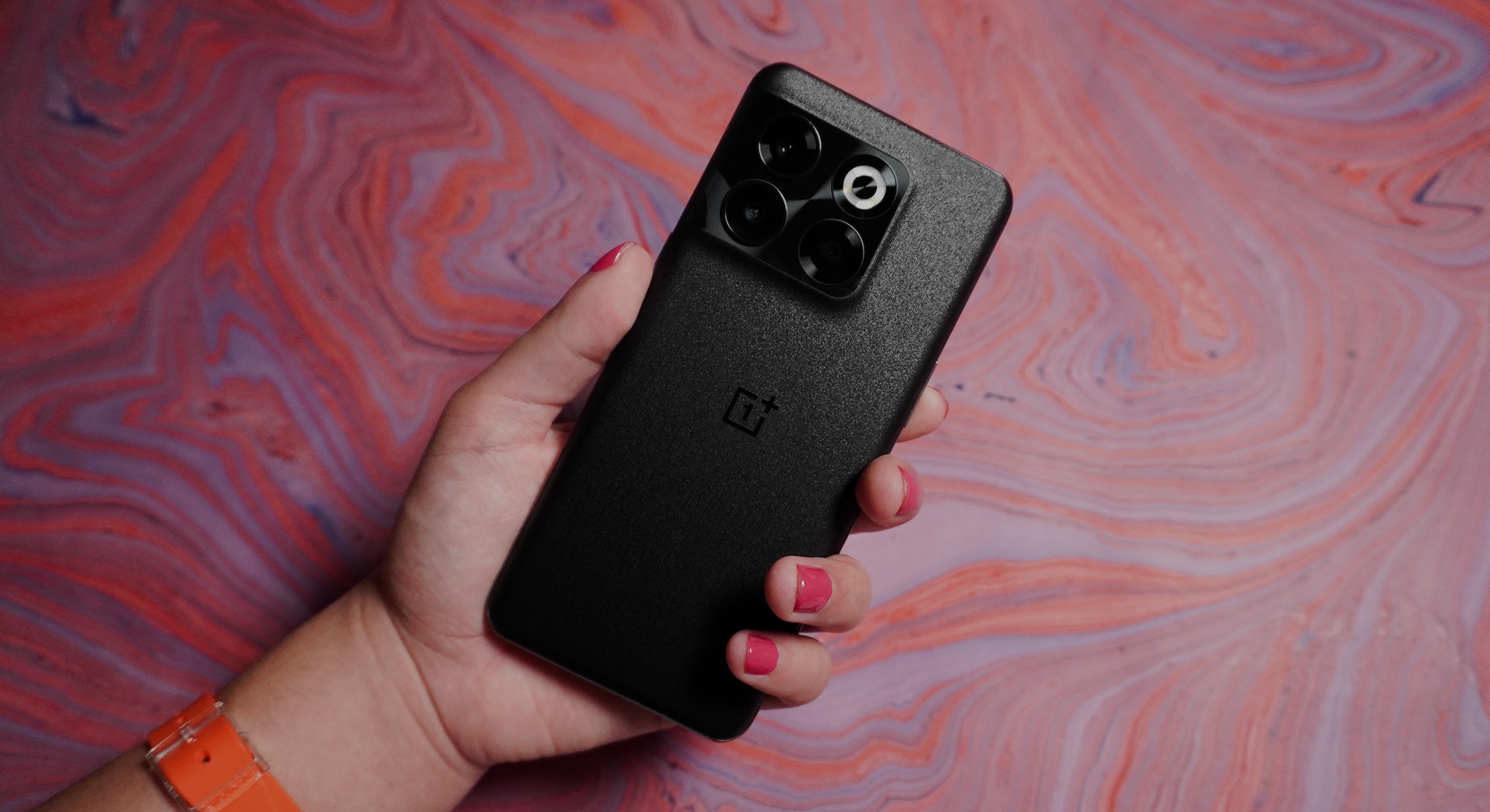 While the designs are similar and the phone does come with the newer, more powerful Qualcomm Snapdragon 8+ Gen 1 chip, OnePlus also made several concessions to bring the starting price of the OnePlus 10T down to a more wallet-friendly $649. (For reference: The OnePlus 10 Pro launched at $899 and is coming down to $799 today.)

You might notice that the Hasselblad branding on the OnePlus 10 Pro is gone on the OnePlus 10T and wonder whether that makes any difference. Ditto for the Alert Slider that has been a staple on flagship phones. Or the fact that there’s no wireless charging. These are just a selection of features that OnePlus cut to get to a lower price; none are dealbreakers for the price in my opinion.

Existing OnePlus 10 Pro users can skip the OnePlus 10T. Other than a small bump in performance, the phone is mostly a downgrade otherwise. However, if you're looking for a phone that's priced right in the middle between mid-range and premium, the Oneplus 10T has a lot to offer.

The OnePlus 10T has a new SoC, camera system, and refined design, but is missing some classic features fans love.

A big slab — I’ve softened some of my distaste for the growing size of smartphones after having a good time with the Google Pixel 6a, but with a 6.7-inch display, the OnePlus 10T is a bit too much for me to handle. That said, if you like big phones (most people do), then I really do believe OnePlus has improved on the OnePlus 10 Pro.

Removing the tacky Hasselblad logo from the camera array was a great step in my opinion. Same thing with the strange “P2D 50T” that used to be on the flash. The back of the OnePlus 10T is clean, save for the OnePlus logo, with a triple-camera system that flows smoothly into the back of the phone and its shiny side rails. The removal of the Alert Slider has upset many OnePlus loyalists — apparently to make room for "high wattage charging, a large battery capacity, and better antenna signal" — but I feel no real attachment to it. At a briefing with press a day before the OnePlus 10T launch, the company said "we're trying our best to bring back the Alert Slider on future products."

The OnePlus 10T comes in two different finishes this go around: the “moonstone black” version I have, with a textured “basalt-inspired” Gorilla Glass 5 back, and a smooth glossy “jade green” model that resembles ceramic.

One downgrade that might bother you: The OnePlus 10T is only IP54, meaning it's safe from splashes and light dust, but it's a step down from the more durable IP68 rating found on most premium phones including the OnePlus 10 Pro.

The front, with a hole-punch camera and big honkin’ 6.7-inch AMOLED display, is flat –– and flat-out gorgeous. OnePlus isn’t using the fancy LTPO tech that's found in the OnePlus 10 Pro and Apple's iPhone 13 Pro, but the OnePlus 10T display does have an adaptive refresh rate that can auto switch between 60Hz, 90Hz, or 120Hz depending on the content displayed. Scrolling on the OnePlus 10T is smooth and responsive. The 2,412 x 1,080 is respectable but not as sharp as the 1440p display on the OnePlus 10 Pro. As an iPhone 13 mini user, I forget sometimes what it’s like to look at a larger, higher resolution, faster refresh rate display — it's really great.

How Plus is Plus?

For reference, because RAM plays a role in these things too, the OnePlus 10T comes in two different varieties:

Taking that into account, and looking at what Qualcomm promised when it first introduced the chips, the improvements to CPU and GPU performance aren’t dramatic (around 10 percent more powerful for each), but the effects on battery life and detail in games could be big. That’s more or less what OnePlus has focused on with the OnePlus 10T. The HyperBoost Gaming Engine that OnePlus is marketing with the OnePlus 10T is supposed to smooth out frame rates, improve touch sampling rates, and keep graphics rendering from destroying your battery. I can’t really say how effective it is outside of Genshin Impact, which OnePlus singled out as supporting its features, but hey, Genshin works well and is one of the most popular mobile games in the world, so good going.

I didn’t personally run into any slowdowns with games on high settings, though the OnePlus 10T did eventually get warm in most cases. Diablo Immortal, the other title that’s becoming my go-to test for mobile gaming, was a little rougher, with the occasional stutter in the game’s open world and more closed-off dungeons. I think that’s just Immortal though, because overall I’ve found the OnePlus 10T to be a competent mobile gaming machine, and in this case, its large size works in its favor. More screen for more game.

Multi-day battery — The better demonstration of the OnePlus 10T’s improved performance is battery life and charging. Both are usually great on OnePlus phones, and that continues here. The OnePlus 10T has a 4,800 mAh dual-cell battery with support for 125W SuperVOOC Endurance Edition charging. That translates to around 20 minutes to go from 1 to 100 percent charge, according to OnePlus, which I found to be true in my tests. You’ll easily get all the charge you need in well under 30 minutes with the 125W USB-C charging brick OnePlus includes in the box. The only thing that’s missing is support for wireless charging (and reverse wireless charging) — also cut from the OnePlus 10 Pro.

OxygenOS 12 — The OnePlus 10T's software is still mostly bloat-free and stripped down where it matters. I’ve been really excited by Google’s decision to embrace customization in Android 12 with Material You, and it’s a little sad that OnePlus clearly doesn’t feel the same way. There are no color-matched wallpapers and icons on the OnePlus 10T, even if Google’s goofy Material You widgets are still buried deep in the customization options if you really want to dig them up.

Sadly, the cameras on the OnePlus 10T aren’t as earth-shattering as the battery life. Nothing is exactly bad about the OnePlus 10T’s setup on paper (well, maybe there’s one thing), I just think in general, the camera system tends to overexpose shots, and favor a contrast-y look that I don’t always like.

The OnePlus 10T does have a notably different arrangement of lenses and sensors than the OnePlus 10 Pro. The flash is now on the top of the square rather than the bottom, and the specs break down as follows:

Besides the decision to swap out the telephoto lens of the OnePlus 10 Pro for a macro, OnePlus has dramatically deprioritized the megapixel count of its other cameras in favor of boosting the wide camera from 48 megapixels on the OnePlus 10 Pro to 50 megapixels on the OnePlus 10T. As someone who doesn’t really take too many telephoto or ultrawide shots, the decision has some merit, especially if it contributed to the OnePlus 10T’s overall lower price. But it does add to the list of missing features that make the “T” branding confusing. Is it really a successor if only some of the specs are getting incrementally better?

Really, my big problem with the cameras on the OnePlus has to do with the macro, which I was never able to get a good shot out of. Even if I don’t love telephotos, I do think they’re ultimately far more useful than a macro. Making that swap really hurts the OnePlus 10T in my eyes, even though night mode is satisfactory, and portrait mode is very effective overall.

All about the price

As a new model for customers heading into the holidays, the OnePlus 10T 5G makes sense. It has Qualcomm's latest and most powerful Snapdragon 8+ Gen 1 chipset; the battery is fantastic; and OnePlus is committing to three years of software updates. These are all great selling points for anyone who’s not looking to upgrade every year.

But you also can't ignore what's "missing" between the OnePlus 10T and OnePlus 10 Pro. The display is 1080p versus 1440p; the Alert Slider is gone; there's no wireless charging; the phone is less water and dust-resistant; and the camera system is decent, but not as good. Some or all of these may be dealbreakers for you personally. To me, they're not — starting at $649, the OnePlus 10T still feels like a lot of value.