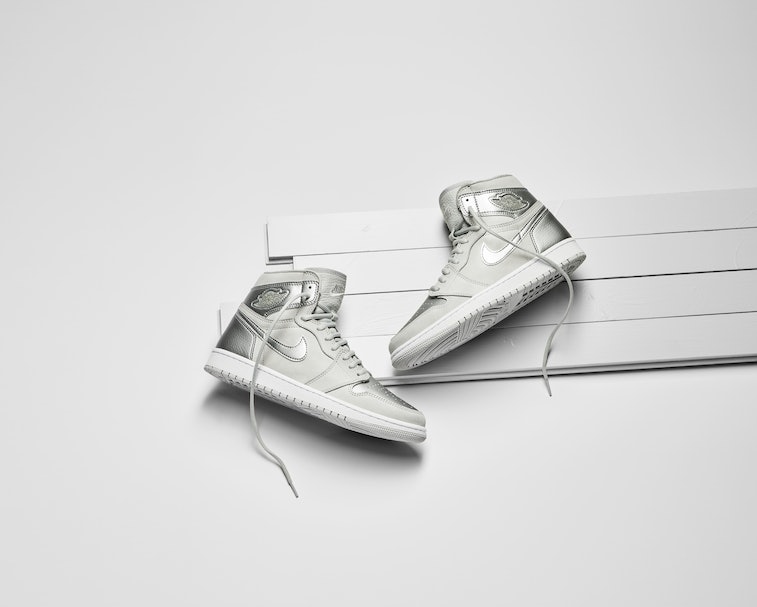 The popularity of the Air Jordan 1 is undeniable, and people's lust for the sneaker only increases with the rarity of any given pair. Such was the case for the AJ1 Retro High OG CO.JP "Tokyo," which originally dropped in 2001 as a Japan-exclusive and was limited to 2,001 pairs. Fast forward to today, almost 20 years later, and Nike is getting ready to bring back the shoe this week. The CO.JP features a metallic silver upper that just makes the entire sneaker pop, along with a special, shiny Jumpman hangtag and sock liners with "CO.JP." graphics on them.

Sleek, and loud yet subtle — In addition to those details, these Jordan 1s come with a woven tag on the inside of the tongue that reads "2001" and "2020," paying homage to the OG CO.JP pair. Speaking of which, there are some subtle differences between the old and new versions, the most noticeable of which is that the 2020 shoes have "Nike Air" branding on the outside of the tongues — a detail that sneakerheads, especially Air Jordan enthusiasts, are quite particular about.

Aside from that, both pairs are nearly identical, albeit the design of the re-release places more emphasis on a metallic silver look that's combined with premium tumbled leather, gray suede, and a classic white midsole. Altogether, Jordan fans and hypebeasts will likely be over the moon with this rendition.

Not as limited – Nike doesn't typically disclose total unit numbers for every sneaker it sells, but considering that the 2020 CO.JP Air Jordan 1s are a global release, it's safe to say these won't be as limited as the 2001 model. That said, the brand is doing something special for this launch in Japan, where the sneaker will be sold in exclusive silver suitcases that will be numbered 1 through 2,020. So, if you don't live there, now may be the time to try to find yourself a Japan proxy that can help you secure the more rare pair.

As for those of you in the U.S., the CO.JP Jordans are dropping August 7 on Nike's SNKRS app, as well as select retailers, for $170. You'll want to be ready come 10 a.m. ET because, as you probably know by now, most Air Jordan 1s tend to sell out in seconds — and while these Tokyos won't be as limited as in 2,001, don't count on them being easy to get.