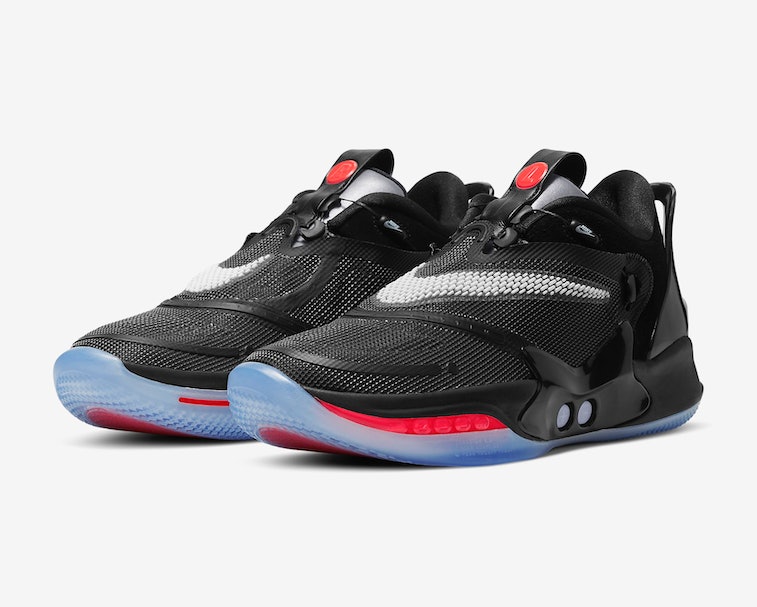 The future is now in its second generation at Nike. The brand's self-lacing basketball sneaker got its 2.0 upgrade earlier this year, bringing with it a significantly more attractive appearance along with improved cushioning a stretchy opening that makes it easier to slip on and off. Now, a mere nine months later, the most attractive thing about the Adapt BB 2.0 is its price.

Nike has given its most technologically advanced shoe a 25 percent discount, which knocks $100 off from its $400 price to $299. Three racks is still a significant investment for any pair of sneakers, but it's the cheapest we've ever seen for the shoes born out of Back to the Future.

The future of sneakers comes with laces that tie themselves at the push of a button.

Coming in the O.G. color scheme — The 25 percent discount only applies to the black and bright crimson color, which was the very first to release out of this generation. Our own Edgar Alvarez had the chance to wear the tie-dye version, which is only aesthetically different, and was pleased with the results.

While still heavier than any other Nike basketball kicks because of the motor powering the auto-laces, the Adapt BB 2.0 feels significantly less "clunky and stiff" than its predecessor. But we all know why you're here, for the wizardry that comes with the laces.

Alvarez in his review:

Naturally, the best attribute of the Adapt BBs is its auto laces — because it's the realization of a sci-fi dream that's now accessible to everyone. Yes, the Adapt BB 2.0s are designed to be a performance shoe, but they're also kind of a "cool" toy or gadget to have laying around, whether you want to wear them to play basketball or not.

Why my editor chose to put "cool" in quotes is something I'll have to pry into later, but I can confirm these shoes are indeed cool as hell. For some, the self-lacing is a mere novelty — and a great one at that — but motor-powered lacing is just one of many ways Nike is working to make its sneakers easier to wear for people with disabilities.

Whichever camp you fall in, you'd be crazy not to smile as your shoes tighten with the press of a button (or even with the help of Siri). And the price of that joy just went significantly lower.