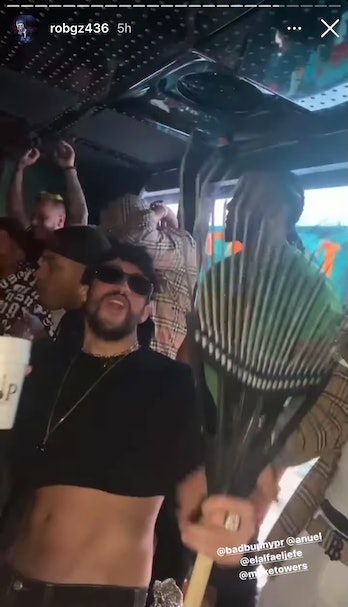 Last night, Bad Bunny was seen celebrating his WWE WrestleMania win at a strip club — and we couldn’t help but notice what he was wearing. While the full fit wasn’t visible on the Puerto Rican artist’s Instagram, where he touted the strip club festivities, an attendee’s Instagram Story gave us a peek at Bad Bunny’s complete look: black pants, his signature sunglasses, and a black crop top. Benito even went as far as to accessorize the fit with a chain and rake (used in strip clubs to rake up bills), though we do wish he had been wearing a mask for his and others’ safety.

Bad Bunny is no stranger to eclectic fashion, but this look may be our favorite, thanks to his fully exposed midriff and a fit combo that would make anyone’s mouth drool. Thing is, men’s crop tops have been a long time coming — and Benito makes a strong case for the piece to go mainstream. With the style last popular in the ’80s and ’90s — two eras now trending immensely in fashion — 2021 is the perfect time for crop tops to return.

Popularized by Will Smith’s half-shirt in Fresh Prince of Bel-Air and Johnny Depp’s cropped football jersey in Nightmare on Elm Street, the style reigned over men’s fashion in the ’80s and ’90s, applying not just to Hollywood stars but sports too. Dennis Rodman flaunted his abs frequently, while football players ripped their jerseys in an effort to show off their midriffs. Of course, the style was also favored in the music industry, with punk and pop legends Tommy Ramone and Prince rocking the crop on multiple occasions — making the top a popular punk look.

Born out of athleticism and masculinity, the garment derived from gym culture, where being shirtless was banned. Men had to wear crop tops if they wanted to flaunt their physiques and still be allowed to work out. So as a style historically associated with sports, punk rock, and masculinity, why does the men’s crop top get so much hate now?

After making appearances in Calvin Klein ads and openly gay celebrities, the style was quickly labeled synonymous with “fragile masculinity” — a message that disappointingly still stands today. But as our perceptions of masculinity and body image are changing for the better, the garment has another chance to reemerge, and once again become a statement in men’s fashion. After all, what’s more fragile — wearing a crop top, or not wearing something because of what other people think?

Take it from a woman — crop tops are sexy AF. Like the short short that took over #hotgirlsummer, the male crop top boasts retro sensibility paired with a sense of exposure, ideal for the post-lockdown liberation we’ll hopefully experience soon. The style celebrates body diversity and sexiness, two things that have been lacking in men’s fashion for far too long.

The style isn’t just approved by myself or Bad Bunny, either. Kid Cudi famously wore a cropped muscle tee for his 2014 Coachella performance, and Dallas Cowboys running back Ezekiel Elliott made headlines for wearing a cropped button-down top to the 2016 NFL Draft. More recently, designers like Gucci, Fendi, Telfar and more sent male models down the FW20 runway in tops cut just above the belly button, and Romeo Beckham flaunted his midriff on Instagram just earlier this year.

People have also rallied for the return of the style online. On the Tumblr blog Crop Tops are for Guys, user-submitted photos of guys in crop tops are posted to celebrate “the glory days when it was common for guys to wear cropped shirts.” Tweets calling for the normalization of the male cropped look have gone viral as well.

Even with the support of celebrities and social media, though, the crop top’s restoration won’t be an easy feat. As one Twitter user pointed out, men who aren’t sporting a six-pack of gleaming abs don’t have the luxury of embracing the bold style because of the very real possibility they’ll be harassed or ridiculed for it. But in true Bad Bunny style, yo hago lo que me da la gana — I do whatever I want. Life is short, so make your T-shirts shorter.