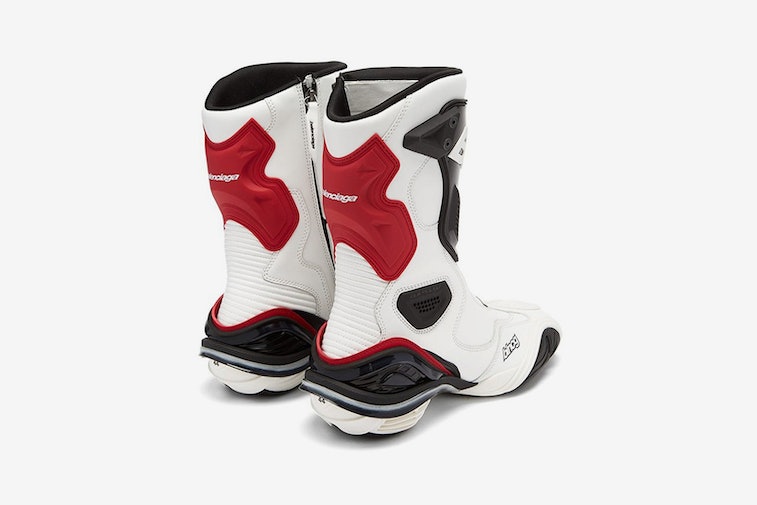 Following up on its soccer cleat, Balenciaga has yet another sports shoe that dares you to wear it in your everyday life.

The Tyrex Leather Biker Boot, first seen at Balenciaga's timely and apocalyptic FW20 runway show, is an elaborate motocross boot built up from the Tyrex sneaker. Crafted from the leather, the boot features several massive rubber panels branded with an updated "BB" logo and Balenciaga's name. On the lateral front quarter, the brand name is abbreviated to "Blng," while the heel bares the shoe's European size in a motif that's become signature to the luxury house's footwear.

Several ventilation panels help keep the Tyrex boots functional and true to the form, while a side zipper makes them easy to get on and off. By all appearances, they would serve well in the express purpose of off-road dirt biking — and hopefully someone has the gumption to cover Balenciaga's new boots in mud.

A familiar base — Both the midsole and heel notch carry over directly from the Tyrex sneaker, which was first released in the beginning of the year. The molded outsole comes with a dynamic grid, matched by a plastic heel notch with wavy lines that would fit in a sci-fi flick. Also coming to the boot from the original sneaker is the square toe, which we're starting to see return in high fashion footwear.

The Tyrex sneaker can be found for as low as $495, but the boot's extension comes with a much higher price tag of $1,260. Right now, it's only available at Matches Fashion, but you can expect to see it other luxury retailers soon.

Motocross is still having a moment — The Tyrex boot comes as part of a wider motocross look Balenciaga showed for FW20, and the sport has been inspiring high fashion for several years now. Rihanna famously rode onto her Fenty runway show on a dirt bike in 2017 and then released a motocross-inspired collection in collaboration with Puma a year later.

More recently, Our Legacy showed several upcycled motorcycle jackets in its SS21 runway show that were inspired by designer Christopher Nying's dirt bike accident as a child. Ambush's upcoming Nike Dunk High collaboration and accompanying apparel also riff on the sport, and even deeper on the streetwear side, Supreme has been collaborating with Fox Racing on a yearly basis since 2018.

Don't expect this look to go anywhere anytime soon. And if you have the budget, Balenciaga's new boot is one hell of a way to adopt it.