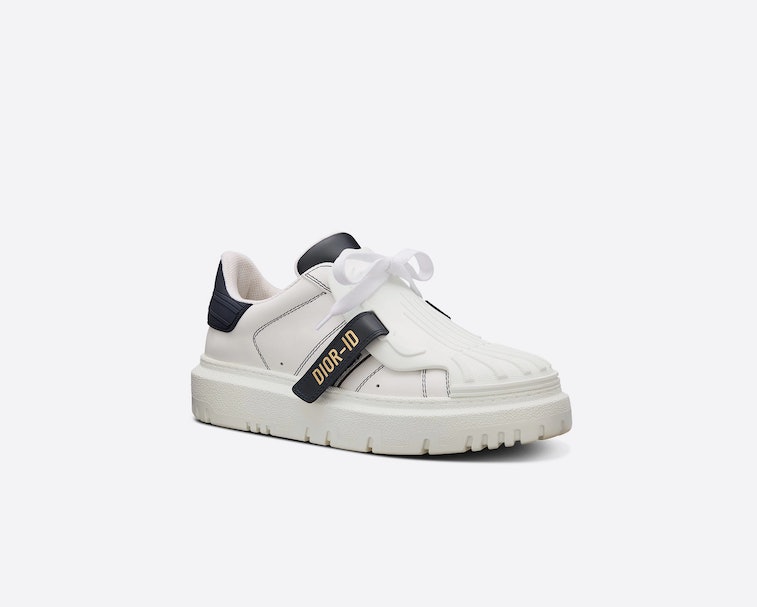 After surviving an array of stout sneakers, we’ve circled back to an appropriately chunky shoe. Dior’s latest footwear offering, dubbed the "Dior-ID" sneaker, appears to be a mix of a loafer and a tennis shoe. As bad as that might sound, it’s the perfect shoe marriage, giving us a business casual look — something the pandemic has deprived us of.

Dior hasn’t made many headlines with its footwear since the drop of the Dior Air Jordan 1, which even made an appearance at the Biden-Harris inauguration. The highly coveted shoe originally retailed for $2,200, but is now reselling for up to $24,000. And while Dior’s newest drop might never rival the hyped silhouette, it’s certainly one that’s more accessible while not sacrificing authenticity. The Dior-ID is a fresh take on trends, and doesn’t limit the label’s sneaker market to just hypebeasts.

Fancy footwear — In fact, Dior’s latest sneaker is a new look entirely. It’s for those wanting to balance formality and nonchalance, or for those missing the dressed-up moments pre-pandemic. To achieve this clean aesthetic, the Dior-ID comes dressed in a two-tone design, with a slew of shades available to pick from.

The chunky silhouette boasts a white calfskin leather upper accentuated with hits of dark blue, nude, green, or red on the lateral strap, heel, and tongue. Colorful contrast stitching adds to the design, while the shoe’s lateral strap reads “Dior-ID” in gold to include a touch of luxury. Additional Dior branding can be found on the shoe’s heel.

Mimicking the silhouette of a loafer, the Dior-ID sneaker is rounded out by five raised lines on its toe. The shoe is also elevated — literally — by a chunky midsole, which connects to a notched outsole decorated with a star, Christian Dior's lucky symbol.

Made in Italy, these luxury sneakers are also available in monochromatic leather and rubber hybrid models. Arriving in black and white with gold detailing, the rubber versions are a great alternative to the Ambush x Converse duck boot, which boasts a more function-forward design.

Cop the chunk — All five iterations of the Dior-ID sneaker are available at select Dior boutiques and on the brand’s website. Each silhouette costs $1,150, but with its ability to enhance any outfit, the price-for-wear is nickels. Plus, the sneaker’s resemblance to a loafer practically makes it two shoes in one. Versatility is the key to a good shoe, and Dior is putting its best foot forward.