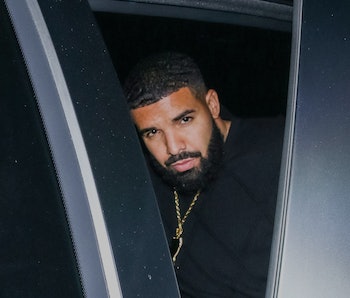 Drake is taking his sweet time releasing NOCTA’s Nike Hot Step Air Terra sneakers. First teased in 2020, the shoes have circulated on social media, in music videos, and seemingly everywhere but retail locations. To pacify fans, the Canadian rapper has given glimpses at the four expected variations of the Hot Step Air Terra, including the latest all-black iteration.

Taking to Instagram, Champagne Papi showed off the sneaker in a “Triple Black” palette. Much like the previous Hot Step Air Terras, this version highlights its perforated leather upper and exposed yellow air bubble at the heel. Hits of metallic silver accent miniature lateral and toe box Swooshes, while also dressing the eyelets and a NOCTA logo sitting on the tongue. The rest of the shoe maintains its all-black look right down to its chunky midsole and heel overlays.

Certified Sneaker Boy — With a “White Chrome” Hot Step Air Terra already expected from Drake’s sublabel, a blacked-out version comes as no surprise. Through NOCTA, the artist has been developing his own street “uniform,” and he’ll need plenty of footwear to get him through summers in Los Angeles and winters at his Toronto mansion.

Drake’s all-white Hot Step Air Terra is his only sneaker with official imagery, but the rapper has teased more iterations — and other silhouettes — on social media. A wild snakeskin version of the Hot Step is anticipated alongside a black and yellow model, both of which feature reflective detailing. Champagne Papi has also revamped his favorite Nike sneaker, the Air Force 1, adding miniature hearts and a quote to the classic kicks.

Dear Drake, please hurry up — While we’re hoping the launch of the Triple Black Hot Step Air Terra (or really, any of Drake’s footwear) is imminent, we may have to endure another year and a half of the artist teasing the shoes on social media. Honestly, the endless rollout has begun to squash the hype for Champagne Papi’s original Nike sneakers.

A release of the Hot Step Air Terra is rumored for the end of this month, although we know better to depend on what Drake promises — he may be loyal to his lovers, but the same faithfulness doesn’t apply to his due dates. Let’s just hope the wait proves worthwhile.