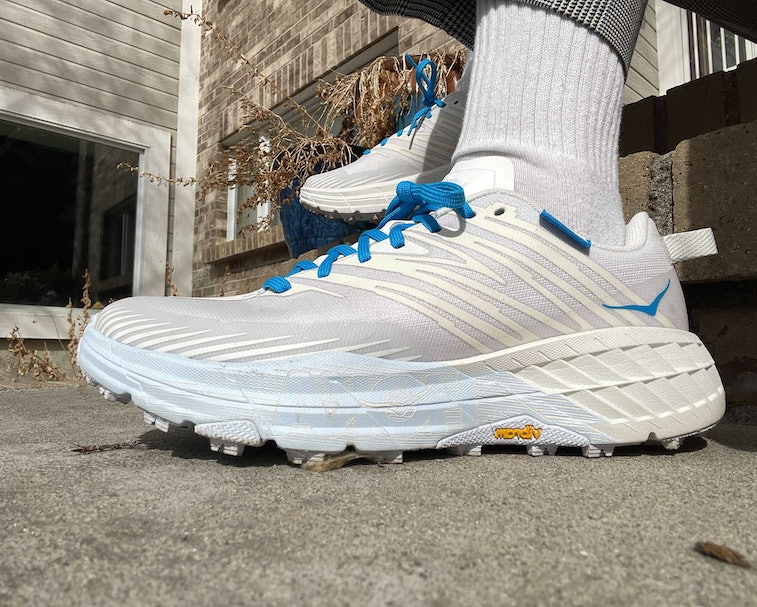 In the Nike- and Adidas-dominated landscape of sneakers, Hoka One One has emerged as a less saturated option for hardcore runners and fashion types obsessed with the technical presentation.

The 12-year-old brand founded by former Salomon employees has operated under one clear goal while putting out increasingly massive-soled sneakers: making the most supporting and performance-boosting shoes for running, walking, and hiking. Whether it’s for the trail or the road, Hoka One One’s maximalist cushioning systems provide an underfoot feeling unlike anything else on the market. Wearing them may take some getting used to, but once you’ve become accustomed to the elevated platform your entire body will thank you.

Hoka One One recently provided Input with a review pair of its “Speedgoat 4” trail running shoes made in collaboration with the Korean streetwear brand Thisisneverthat. Having already run and walked in Hokas before, I was still surprised at how comfortable the sneaker is in everyday life. In a week of owning the Speedgoat 4, I’ve worn nothing else — and I was so excited to get started that I neglected to take photos while they were still brand new.

Soles unlike anything else — Other lightweight, ultra-cushiony running shoes on the market are often described as feeling like you’re stepping on clouds. Hoka One One’s output is remarkably light for the size of the soles, but you’ll forget that your shoes are there while wearing them. Instead, it feels more like you’re on the most advanced scaffolding system your feet can get.

Wary of cold weather and the high altitude of my temporary Colorado outpost, I’ve yet to run in the Speedgoat 4 — you know, the thing it’s meant for. But I can say the shoe has served me exceedingly well as I’ve run errands and journeyed across outdoor bars in my city. Because of alignment issues with my hips and a neuroma in my foot as a result, I need a little bit more from my everyday footwear to combat the residual pain. The Speedgoat 4 helps mitigate the effects of modest activity on my body, and they’re also just a plain delight to wear.

Hoka One One is hyper-specific in its product descriptions, which makes it easy to find the precise shoe for you. The Speedgoat 4, with its balanced and neutral support / cushioning system, features 4mm of drop from the heel to toe, which is on the lower end of the scale. A higher number can help prevent overstrides and bring out more force from the heels, but it can also put more stress on the hip and knees. For what I’m going through with my unexpectedly young and broken body, the Speedgoat 4’s modest drop is perfect.

But they look hot, too — Even though the fashion crowd has adopted Hoka One Ones as part of a sort-of athletic dadcore look, the brand’s color schemes often leave much to be desired. They’re almost always bright and usually too much so. But in all-white with faint traces of Thisisneverthat’s signature shade of blue, the collaborative Speedgoat 4 is one of the more attractive Hoka One One sneakers I’ve ever seen.

White is an odd choice for a trail running shoe, and I have a feeling most people who buy it will be wearing them in the city more than on dirt and gravel. This application will make getting the collab dirty less of a concern, although it’s still destined to look less than pristine upon your first wear.

A theme I’ve tried to maintain in the Wear Tests I’ve done is covering shoes that are easily obtainable — because a review only goes so far when getting the shoe requires extreme luck or an unlimited budget. Unless you’re needlessly concerned with hype, you should be relieved to know you can pick up Thisisneverthat’s Speedgoat 4 for $160 in a full size-run. If you like sneakers but are tired of what the culture’s become, this is a great sneaker for you.