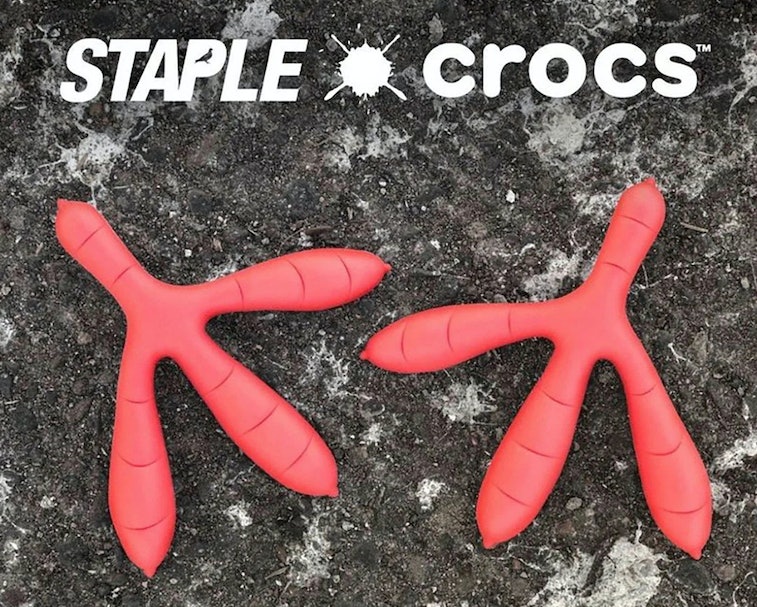 Even the pigeons are wearing Crocs these days. As more people prepare to break out their springtime footwear, the casual shoe brand is linking up with sneaker designer Jeff Staple to present a very New York City pair of the foam clogs.

Birds of a feather — Staple has teased the arrival of his iconic imagery at Crocs, with red pigeon feet likely to arrive as special Jibbitz charms to adorn the clogs. An additional shot shows a red strap hinge with a raised pigeon and a pavement-like color palette for the shoe itself. It even looks like they’ve been designed to look like they’ve been bombed with pigeon poop — a sight New Yorkers are well familiar with.

Staple’s ties with the Concrete Jungle go deep, as his namesake brand is known for capturing the energy of New York City. Staple told The Sole Supplier in 2020 that the pigeon’s “hustle, survival skills, and ability to thrive through extremely tough conditions is inspiring.” Paired with the versatility and durability of Crocs, you’re good to go.

Staple is most famous for his Nike SB Dunk “Pigeon” and the chaos that ensued upon its in-person release in 2005. Although that was one of the first and most extreme examples of the craze rare sneakers can generate, hype for Staple has chilled out in the years since. He’s even gotten into the NFT game as one of the first collaborators for RTFKT Studios, which is now owned by Nike.

Can’t go wrong with Crocs — With every collaboration, Crocs aims to capture the essence of its partner. Salehe Bembury’s 2021 clogs were adorned with his fingerprint motifs, Karol G embraced self-love with her red pair earlier this year, and Beams even appealed to the outdoor adventure community with fully functional hiking clogs.

An official look at the Staple x Crocs “Pigeon” clogs will most likely arrive in the next week or two and the collab has been planned for an April 12 release. Even if you’re not from New York, you have to admire the hustle.