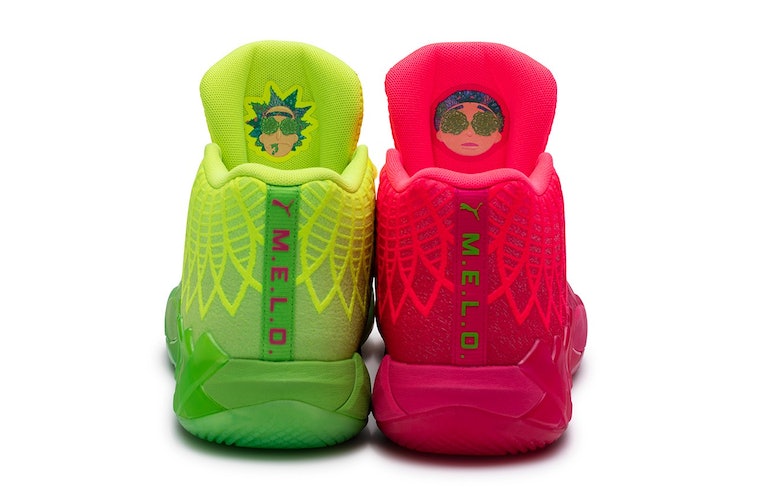 Only a few months after debuting his signature MB.01 sneaker with Puma, LaMelo Ball has returned with another round of the hot footwear. This time taking inspiration from his own team colors — and snagging a collaboration with Adult Swim show Rick and Morty — the point guard has a trifecta of new MB.01 designs prepped for the coming weeks. Each bears the phrases “1 of 1” and “rare” to nod to LaMelo’s undeniable talent — both on the court and in the sneaker studio.

Initially launched last October, the Puma MB.01 the player’s first signature shoe, and also marks the first signature shoe release from Puma Hoops since the basketball sector re-launched in 2018. Co-designed by Ball, the sneaker features a flame graphic on its collar to line up with the player’s famous rocket ankle tattoo (or anyone looking to emulate his style on court).

Hard to miss — In mismatched neon green and pink hues, Ball’s Rick and Morty sneakers are quite literally the highlight of the upcoming trio. Nodding to the misadventures of the show’s titular characters, the shoes feature swirling portal motifs alongside graphics of Rick and Morty’s faces. Each boasts branding from Rick and Morty near the eyelets, while LaMelo’s own branding appears on the tongue and heel.

The point guard’s next sneaker brings its theme down to Earth, more specifically honoring Ball’s team the Charlotte Hornets. Dubbed “Buzz City,” the shoe opts for a mainly black upper, detailed with teal blue hits on its graphic collar, toe accent, and LaMelo’s signature “Not from Here” phrase on the tongue. The accompanying gray and red sneaker — seemingly lacking a definitive theme — follows suit, accessorizing its muted base with bright scarlet accents.

Each shoe features tech like Puma’s Nitro Foam, which helps offer superior responsiveness and comfort. Non-slip rubber helps the sneakers with durability and traction, while breathable monomesh on the upper gives the footwear a lighter feel. And with new designs to choose from, you’ll be able to wear the MB.01 on or off court.

Ball is life — LaMelo’s “Buzz City” sneaker hits shelves first, with a release date of February 2. His gray and red MB.01, as well as the wild Rick and Morty pair, debuts later on February 18. Each shoe will launch on Puma’s website and in stores, with the duo-toned pairs priced at $125 and the Rick and Morty version retailing at $135.