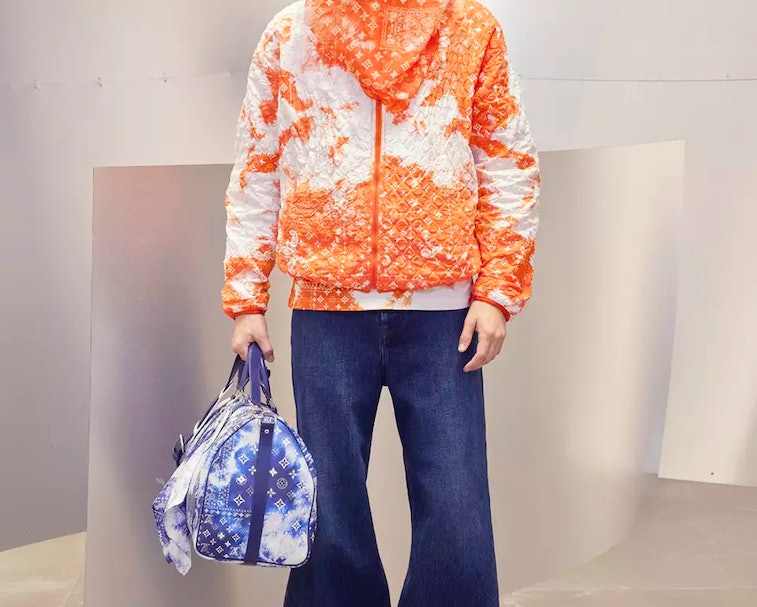 Louis Vuitton is set to begin releasing products from its pre-fall/winter 2022 collection, the last designed by Virgil Abloh before his passing. Naturally, the product now has a sentimental context and serves as one of many tributes to Abloh’s lasting legacy.

Taking a look at what’s to offer, Abloh’s touch is everywhere. Louis Vuitton also brought in Milan-based tattoo artist Ghusto Leon for some fresh perspective. The result: a series of suits, shorts, shirts, coats, and matching sets that exemplify a “boyhood ideology.”

No shortage of LV — The garments can be worn alone or as layering pieces, and nearly all of them have some kind of graphic from Leon, be it graffiti, jacquard, embroidery, hand-bleaching, or other illustrations. One matching set features a red and blue image of a mountainscape at the hem of its shirt and pants, while another is covered in notes of graffiti. A sweater sees an all-over flame print, while the bags — duffles, cross-bodies, and backpacks — sport revamped Louis Vuitton monograms.

“Virgil” lives on — If ever a collection put Abloh’s heritage and philosophies on display so eloquently, it’s unfortunate that it had to be his last. Abloh explained that while fashion tends to deny commercialism through its practices, his idea is to celebrate it, according to a Vogue interpretation of the collection. Not through the overstated and often-ostentatious runway assemblages, but through the pre-capsules, which spoke on his desire for them to be worn universally.

Street style influences can be seen throughout the collection as well, through the logo bucket hat, beekeeper hats, paisley leather, oversized chains, and layered skirts. While formal pieces are paired with laidback and functional ones, the blend of both could be seen as Abloh’s underlying effort to move menswear beyond men and into the genderless — or, in his words, trendless. “I believe that building blocks stacked upon each other throughout our lives form the narrative of what defines menswear,” Abloh said, according to press notes.

Although Abloh’s legacy has been lifted by others wearing his designs and auctions memorializing his past collections and collaborations, some still fail to understand just how far his legacy reaches. His Memoriam snub by the Grammys is an example of that, but this latest assortment of apparel just shows how much more than a “hip-hop designer” he really was.

The collection was approved by the late designer, who “completed and photographed” the capsule before his sudden death in November. The first iteration of Abloh’s Louis Vuitton collection for Pre-Fall/Winter 2022 will be available on April 28 through the LV website and physical stores.