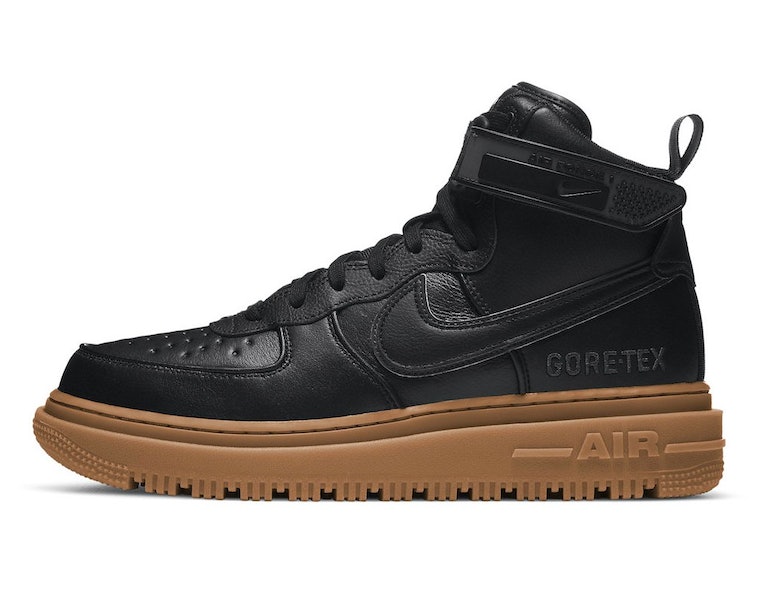 Last year, Nike hit its Air Force 1 Low with Gore-Tex to create one of the best shoes of the winter. Some sizes and colors are still available, and on sale at that, but we've now got our eyes on the latest version of the winterized classic.

Nike now has an Air Force 1 Boot equipped with Gore-Tex in the pipeline, perfectly bridging the line between boots and sneakers. The high-top hybrid comes equipped with a sturdy plastic velcro strap replacing canvas and a beefy midsole with some serious tread. But most important is the waterproofing courtesy of Gore-Tex, which we're reminded of with an embroidered logo underneath the Swoosh.

Three color schemes have already surfaced — and we should expect several more to come, similar to the AF1 Gore-Tex's run from last winter.

Gum is always the answer — The first color variant revealed features an all-black upper with a gum sole to fawn over, while a "wheat" version calls to mind the quintessential Timberland 6-inch boot. Rounding out the initial leaks is an AF1 Boot with an olive upper outsole sandwiching a white midsole.

Additional tweaks to the new sneaker boot include a wider pull tab and slight perforations on the toe that won't allow water to seep through. Much like the sole it sits on, the embossed "Air" logo has been supersized.

New York City's gonna love it — While I can confidently say that NYC will embrace yet another winter-equipped Air Force 1, this sneaker boot should be a hit in any cold climate. Narrowing down your sneaker rotation is an unfortunate inevitability for the winter, but Nike's latest Gore-Tex banger will allow you to have the best of both worlds.

Look out for the Air Force 1 Boot Gore-Tex to arrive soon for $180.