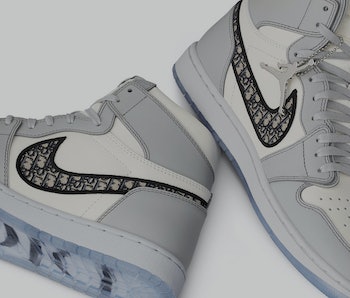 Nike rang in June by receiving a trademark and patent for the Air Jordan 1, a move that should strengthen the sneaker giant in its fight against bootleggers. Despite the sneaker first releasing in 1985, Nike just filed for the trademark last summer — and the events that have since unfolded have shown what’s at stake.

Warren Lotas, with his bootleg Dunks, and MSCHF, the Brooklyn art collective responsible for the instantly notorious “Satan Shoe” Air Max 97s, have drawn lawsuits from Nike that both ended with settlements in Nike’s favor.

While the newly awarded patent could make Nike’s legal cases against bonafide bootleggers, customizers, and creatives who crib from the Swoosh, the opposition isn’t giving up so easily. New York City attorney Robert Lopez has filed a counter-suit against Nike alleging that the corporation committed fraud in its trademark filing.

The argument — In the suit, first reported by Complex, Lopez takes issue with Nike trademarking the Air Jordan 1 design without the Swoosh. One could easily argue that the Air Jordan 1 is recognizable even without Nike branding, as was done when Steve Madden released a sneaker in 2019 that clearly ripped off Travis Scott’s collaboration.

Lopez, whose law firm's website says it supports independent brands and small business owners in “enforcing their brand ownership rights against corporate giants,” takes issue with the omission because Nike has never released such a Swoosh-less Air Jordan 1. Therefore, the suit argues, the trademark for the Air Jordan 1 was “improperly issued.”

“Nike, Inc. is attempting to secure an IP portfolio of unregistrable or improperly registered marks so that it can implement its enforcement actions against small and independent clothing store owners to gain a strong hold and monopoly over the sneaker and apparel industry,” the suit says.

Nike’s pursuing more trademarks — Prior to receiving a trademark for the Air Jordan 1, Nike successfully petitioned for the design rights to the Dunk, Air Force 1, and Air Max 95 — although it was not able to trademark the latter’s unique sole. According to The Fashion Law, the corporation has also applied for registration of the Air Max 90, Air Foamposite One, Air Jordan 3, Air Jordan 4, Air Jordan 5, and Air Jordan 11.

And just like the Air Jordan 1, each of the filings renders the sneaker without the Swoosh. “It enables Nike to claim broader protection than if the Swoosh were included,” TFL founder and lawyer Julie Zerbo wrote. “As such, protection for various silhouettes, alone, without the placement of the Swoosh widens the pool of potential parties that may end up landing on the receiving end of counterfeiting claims...”

Among that pool would be Garcia himself, who said in the suit that he’s developing his own sneaker that the Air Jordan 1 trademark would “put a cloud on.” That is assuming, of course, that such a shoe wouldn’t already be wack enough to bring a self-inflicted cloud.