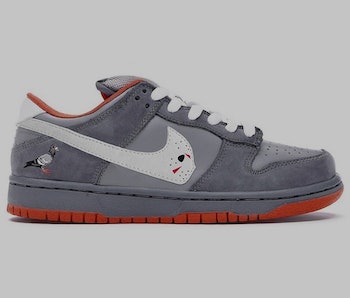 Nike and Warren Lotas' well-publicized legal battle over bootleg sneakers appears to have come to a resolution. The two parties have agreed to a confidential settlement to be approved by a federal judge in California. If the court signs off, Lotas will be barred from making any sneakers that infringe upon Nike's trademarks and trade dress again.

Nike filed suit against Lotas over his SB Dunk replicas, which the company considered to be "illegal fakes." Lotas made the sneakers, which were near-mirrors of iconic Dunks including the "Pigeon," available for pre-sale but was prevented from going forward with shipment during the legal process. Before the case was resolved, Lotas announced he would make replacement sneakers for those who'd already placed orders — but despite the more overt deviations from Nike's designs, the sportswear giant claimed they were still an infringement.

Terms of the settlement — Under the terms of the agreement, Lotas would be barred from "manufacturing, transporting, promoting, importing, advertising, publicizing, distributing, offering for sale, or selling any products” that infringe upon Nike's trademarks and trade dress. Among the relevant designs are the "material panels that form the exterior body of the shoe" and the "vertical ridge patterns on the sides of the sole" — the latter of which is what Nike took issue with on Lotas' replacement sneakers.

The filing also seeks to render judgment against Lotas for "infringing and diluting Nike’s trademarks by way of its lookalike sneakers and an array of garments that bear a logo that is confusingly similar to Nike’s swoosh and/or a silhouette that mirrors Nike’s dunk."

No monetary settlement was mentioned in the agreement, as is typical for cases settled out of court, but it's likely Lotas had to cough up some money.

The offending sneakers — Nike filed suit against Lotas in October after he had held pre-orders for his recreation of the iconic "Pigeon" Dunk, which had been signed off on by the original collaborator Jeff Staple. The shoe was close to an exact replica of its predecessor, with the exception of a Swoosh altered to look like Jason Voorhees' mask from Friday the 13th.

Citing the bootleg "Pigeon" Dunk, as well as the Stüssy "Cherry" and "Heinekin" recreations Lotas previously made, Nike accused the designer of being a "bad actor" that "undermine[s] the DNA of sneaker culture by promoting and selling fakes." In his defense, Lotas said his intentions had been misconstrued and that, as a small business owner, he was being bullied by a much larger corporation.

For onlooking sneakerheads, the case was a flashpoint for the merits of so-called bootleg sneakers. Are the custom sneakers "fakes" that deserve mockery in a culture where authenticity is key? Or are they worthy bespoke pieces that take inspiration from beloved sneakers? From a legal standpoint, the former view has won out — but individual consumers may still see merit in such designs.

Should the settlement be approved by the judge as expected, there may now be a void in the marketplace. Who's going to offer up more riffs on Nike's designs when they've seen the legal consequences for doing so?

What's next for Lotas? — Shortly after the settlement agreement was filed, Lotas announced his "Reaper" sneaker is now in production. As you can see above, the close-cropped photo doesn't show what the sneaker's sole looks like. It's likely changed from the incarnation he revealed earlier, lest Lotas is looking for more legal trouble.