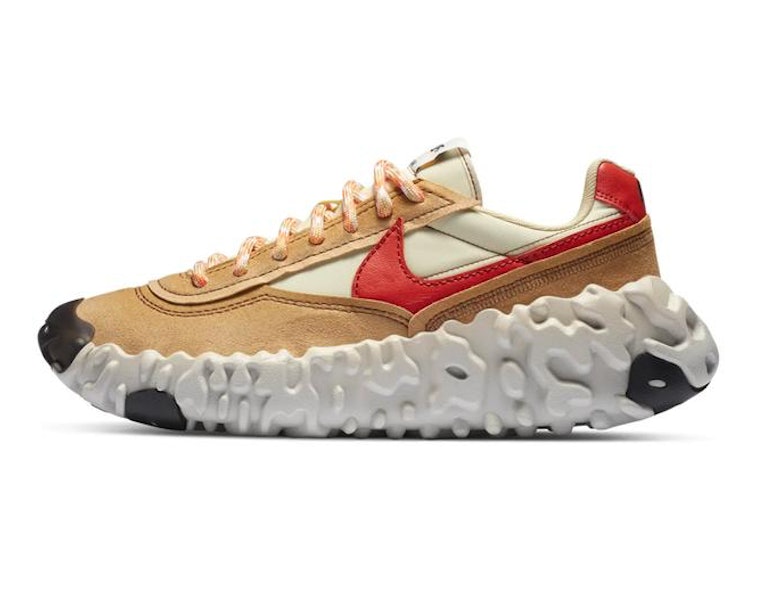 Nike is making it easy for us to look forward to the new year with a slew of new releases. Continuing its rollout of the OverBreak SP, the brand has surprised fans with a new colorway, eerily similar to Tom Sachs’ coveted Mars Yard sneaker. The upcoming “Fossil” shade range will definitely have you doing double-takes.

If you’re someone who wasn’t chosen to wear-test the 2.5 version of the Mars Yard, you can think of the OverBreak colorway as a consolation prize. While there’s nothing that officially links the new shoe to Sachs’ creation, the colorway sports a similar tan and beige makeup and red accents on the Swoosh and heel tab. The only detail differentiating the two models is the OverBreak’s plush midsole, which honestly looks a little more comfortable than that of the Mars Yard.

Matching tan sock liners, trail-style laces, and exposed lacing give the OverBreak a rugged feel. Underneath, a full-length React cushioning unit provides ultimate comfort. The design mirrors that of the ISPA OverReact silhouette which debuted earlier this year, continuing the shoe’s streak of imitation.

Nike is no stranger to releasing new iterations of past models, but why pick a colorway so similar to the Mars Yard, especially so close to its release? Is the brand looking to appease hungry Sachs fans, or did it make too many Mars Yard prototypes before announcing the wear-test initiative? Make it make sense.

Second best to the wear-test — Despite its similarities to the Mars Yard, the Nike OverBreak SP “Fossil” is a pretty cool shoe, with a colorway that could spice up any outfit. We just hope that in time, it’ll learn self-love and know it’s okay to be itself.

Whether you like the Nike OverBreak SP “Fossil” for what it is or for what it’s trying to be, you can score the sneaker for $140. Nike has not yet announced when the shoe will drop stateside, but the OverBreak is set to release in Asia on January 5. In the meantime, you can still submit an application to wear-test Tom Sachs’ Mars Yard 2.5.