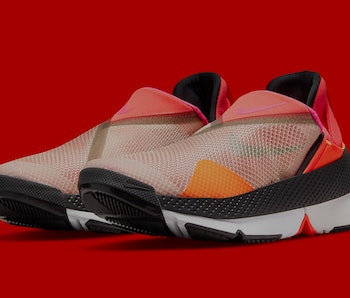 Launched earlier this year, the Nike Go FlyEase is an innovative shoe designed for people with disabilities to put on and take off entirely without hands. The problem is all the other people who wanted them, whether for personal use or to resell at a steep profit, leading to an immediate sell-out for the shoe that largely shut out the very people they were designed for.

Nike has been criticized for not doing more to ensure that people with limited use of their hands could acquire the sneakers that can make the process of getting ready much easier. And while the Go FlyEase hasn’t been re-released since February, Nike did recently partner with the Chicago boutique Notre to give away pairs to people who actually need them.

We’ll soon see if Nike has any new plans for a wider release, as a new color scheme for the Go FlyEase has surfaced. Red, pink, and peach feature on the new version of the accessible sneaker set to drop soon. And while no details have been released yet, we hope Nike works harder to get the kicks where they can be used best.

How the sneaker works — Nike’s FlyEase line has previously been tailored to people with disabilities through simpler lacing systems and materials that make the shoes easier to step into, but the Go FlyEase is the first completely hands-free sneaker.

The remarkable shoe uses a bi-stable hinge to allow the user to step into and out of the sneaker using only their feet. Stepping on the heel of the Go FlyEase makes the entire shoe bend “open” for easy entry or exit, and it snaps back into place for a snug fit when the wearer puts their foot inside.

What’s less clear is what exactly Nike might do to better prioritize customers with disabilities. The easiest solution would be simply to make greater quantities of the Go FlyEase to meet demand, or it could partner with organizations that benefit the disabled community to make the release more targeted and smooth. Surely, a corporation with as much influence as Nike could figure it out — and we’re hoping it does better this time around.