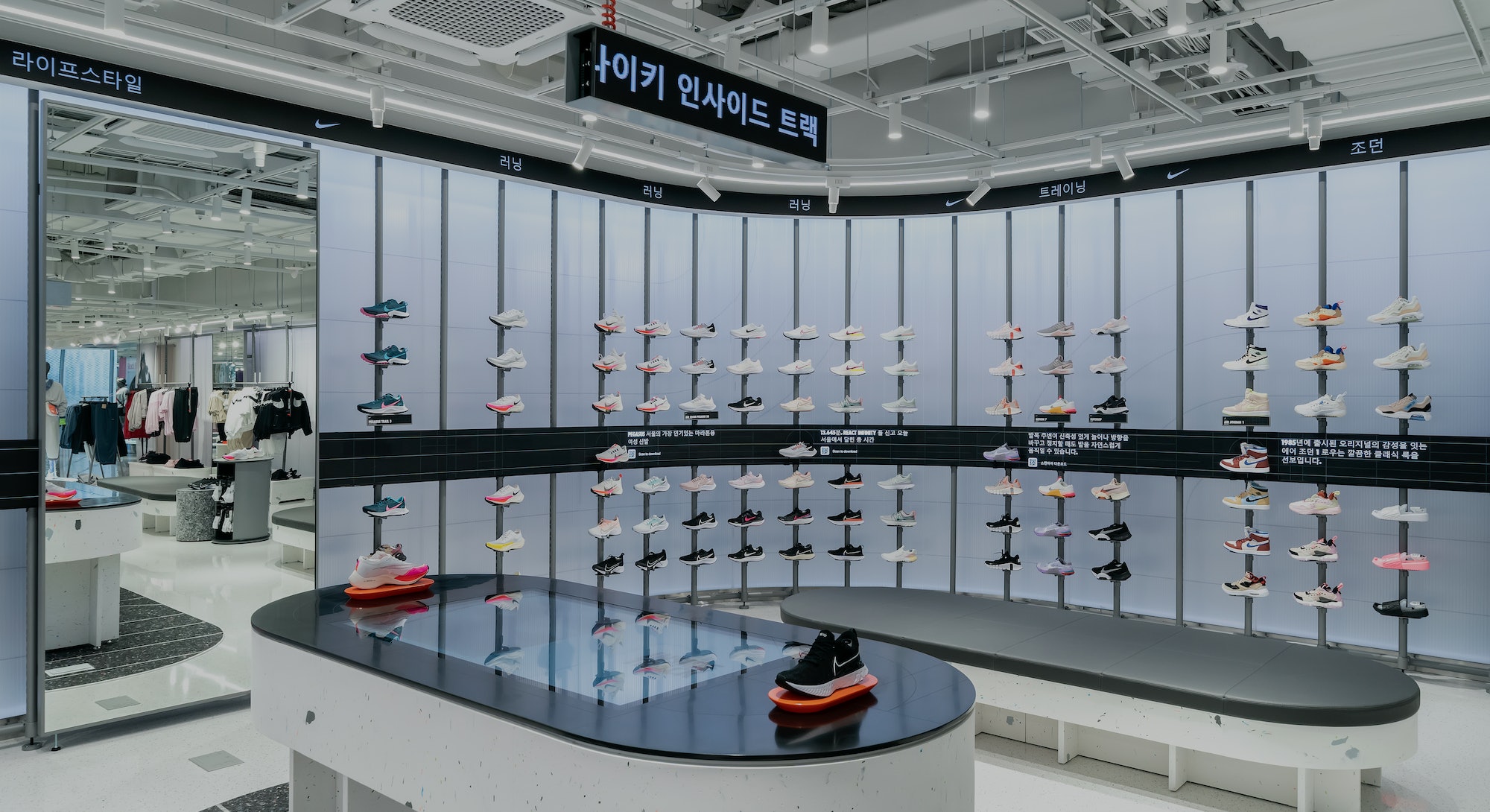 There’s still a reason for the brick-and-mortar retail store to exist — it just has to take on a new, futuristic meaning. And to find the best example of how that’s being done look no further than Nike, which over the past few years has been trying to perfect the formula for the ultimate in-store shopping experience. All in an age heavily dominated by apps.

As part of that (successful) business strategy, the company has now unveiled its second “Rise” concept, a 24,000-square-foot space in Seoul, South Korea that features personalized, data-driven features designed to create interactive experiences for people who come into the store. This includes high-tech elements like a massive three-story screen that displays real-time running stats from the local community, as well as an interactive RFID-powered table where shoppers can place two different shoes and get information about them before they make a purchase.

Nike’s Rise Seoul store is the latest in a series of retail concepts the company has rolled out recently, including “Live” and “House of Innovation,” which focus on offering curated products to shoppers based on where they live and making it easy to use the Nike app to buy and pick up products inside the store, respectively. With Rise, the sportswear giant is expanding on that vision through immersive, in-store ideas that combine technology with real-life interactions from shoppers.

The Sport Hub, for example, lets people come into the store and find sporting events to participate in with the Nike community. The City Replay, meanwhile, offers a service where consumers can repair old or worn Nike shoes and apparel on-site. And then there’s The Huddle, which allows shoppers to participate in programs that cover what Nike deems as the five key facets of fitness: movement, mindset, recovery, nutrition, and sleep. These features are all in addition to the aforementioned LED and interactive screens throughout the store, which are eye-popping and should help entertain consumers as they come in and out of the store.

“We’re looking for this new kind of integration between physical and digital.”

Daniel Heaf, VP of Nike Direct, told Input in an interview that the idea with these dynamic displays and how they pull real-time data from apps like Nike Run Club is to never have the shopping experience be the same if people come in on separate days. “Ultimately, we’re looking for this new kind of integration between physical and digital, where we can blur the boundaries and consumers don’t see the channels at all. They just see the brand.” he said. “It is both experiential, and then of course it has the convenience factor, too.”

Beyond that, Nike is also bringing sustainability aspects into its Rise Seoul store, as an expansion of its Move to Zero initiative. For the first time ever, Nike is going to start accepting gently-worn apparel — in addition to sneakers — which the company says it will either recycle or donate to nonprofit organizations that are helping communities in need. Aside from Rise Seoul, this program is now live in Europe, too, and Nike says it plans to test, learn, and then eventually expand it to other retail locations across the world in the near future.

“Sustainability is at the forefront of our consumers’ minds.”

From Space Hippie to Nike Refurbished, Move to Zero is far from being simply a marketing play for Nike. “Sustainability is at the forefront of our consumers’ minds, and we’re thinking about broadening those services every day and every year,” Heaf said. He added that, along with its recycling efforts, Nike is keen on pushing consumers to keep their products longer and, if it can do that by giving a new life through its in-store repair and customization program, that’s a win-win for the brand and its consumers.

As for whether there will be more of these Rise stores around the globe, Heaf said Nike shoppers who want to experience these concepts outside of Seoul and Guangzhou can “be sure of that” in due time. “The way that this store connects physical to digital is a game-changer,” he said. “It couldn’t be a more opportune time to launch a store like this, where it is both a physical expression of the brand, as well as the virtual expression of the brand. So we’re feeling so positive about the consumer sentiment we see from that.”