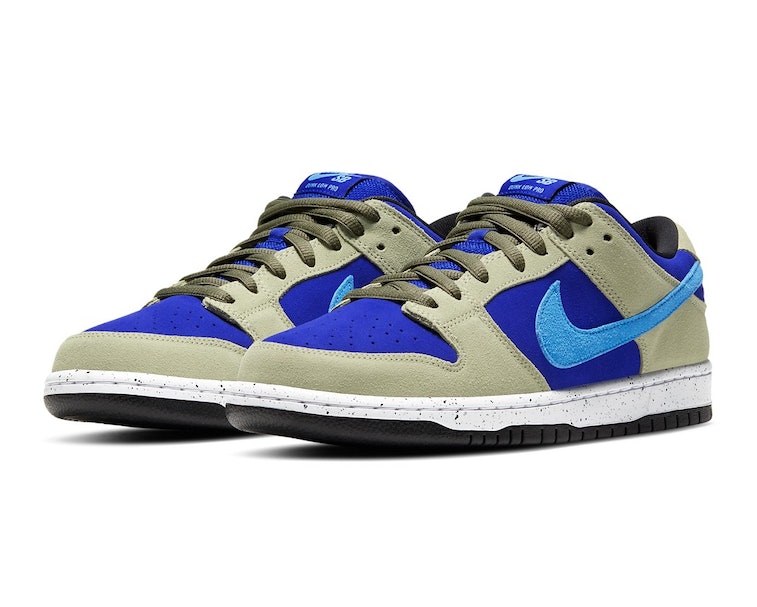 Nike SB is continuing to pull from its outdoor brethren at ACG with an upcoming Dunk Low Pro inspired by the iconic Caldera boot. Tonal blue and tan combine as a recreation of one of the ACG Caldera hiking boots from the early ‘90s.

Despite it being a cult-favorite from the nascent days of ACG, there’s little in the way of history of the Caldera available online. What we do know is that the shoe was first introduced in 1992, with the blue and tan variant arriving a year later in 1993. Nike has never retro-d the sneaker, so the Dunk homage is the closet thing you can get without a serious hunt.

A similar color scheme also appeared on an early ACG Air Terra, the predecessor of the hit Air Terra Antarktik released early last year. Officially, this makeup is known as “Celadon,” named for the turquoise-like shade of blue that appears on the Swoosh.

A follow-up to last year’s ‘ACG’ Dunk — Nike SB released another ACG-inspired Dunk Low last summer, which took the purple, red, gold, and black color scheme from the 1991 Air Terra. It was only available in select skateshops with Nike SB accounts, which could indicate the same rollout for the Caldera version coming up.

The SB Dunk Low Pro is tooled specifically for skating, with a thicker tongue and a Zoom Air tucked into the sockliner and midsole. They’re also easy to spot for the Nike SB logo on the tongue and outsole, as well as thicker and rounder laces as opposed to the standard Dunk’s flat ones.

The Caldera makeup sees a speckled midsole and black outsole sitting beneath the suede upper. A dark blue forms the base, while tan makes up the mudguard, eyelet, foxing, and mustache. Celadon blue, meanwhile, is used only for the Swoosh and logo hit on the tongue.

Slated for April — While not officially confirmed, the SB Dunk Low Caldera is expected to release sometime in April for the standard low price of $100. Chances are it’ll only release at select skateshops across the country, and you’ll actually have to go in-store to pick up a pair.