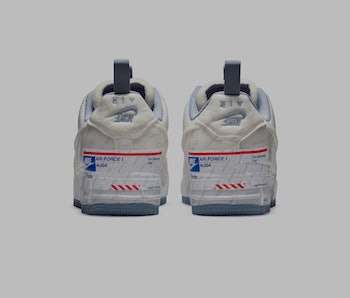 The long saga of Nike’s unsanctioned-turned-sanctioned USPS Air Force 1 will finally come to a close at the top of the month.

Nike has confirmed a May 28 release for the controversial sneaker, which sparked criticism and threats of legal action from the United States Postal Service. Surprisingly, the two parties were able to come to terms on the yet-to-be-released sneaker and go forward with the Air Force 1 being officially licensed by the Postal Service.

Officially known as the Air Force 1 Experimental “Postal Ghost,” the sneaker could have just been a cheeky bit of inspiration that arrived to little fanfare. But because of the story that’s unfolded since the sneaker leaked, the AF1 is now likely to be an instant collector’s item.

How did we get here? — Until now, Nike had never officially unveiled its USPS-inspired Air Force 1. Images of the sneaker, which riffs on Priority Mail packaging, first leaked in early March, and it took nearly a month for the Postal Service to notice. When the USPS did in fact notice, it issued a public statement criticizing Nike for stealing its intellectual property and threatening to take legal action if necessary.

“The Postal Service, which receives no tax dollars for operating expenses and relies on the sale of postage, products, and services to fund its operations, protects its intellectual property,” the USPS said. “Officially licensed products sold in the marketplace expand the affinity for the Postal Service brand and provide incremental revenue through royalties that directly support it. Sales of unauthorized and unlicensed products deny support to the hardworking women and men of the Postal Service.”

Timing made the story particularly rich, as Nike was then in the middle of going after MSCHF for its “Satan Shoes” made in collaboration with Lil Nas X. Here was one of the biggest retailers in the world going after a small Brooklyn art collective for trademark infringement while at the same time taking motifs from a government agency.

Nike already had a history of treading on other parties’ intellectual property rights, and the USPS was quick to call the brand out for its hypocrisy. “This is an unfortunate situation where a brand as large as Nike, which aggressively protects its own intellectual property, has chosen to leverage another brand for its own gain,” the Postal Service said.

And now, resolution — After a month without any updates, the USPS and Nike were able to come to an agreement outside of court that would guarantee the sneaker’s sanctioned release. The vacuum-sealed, sticker-covered sneaker will allow you to take part in the narrative as it releases on the SNKRS app at 10 a.m. ET this Friday, May 28.

For those able to cop, the Air Force 1 will set you back $130. But what we really want to know — and likely never will because of the nature of private settlements — is just how much the shoe cost Nike.