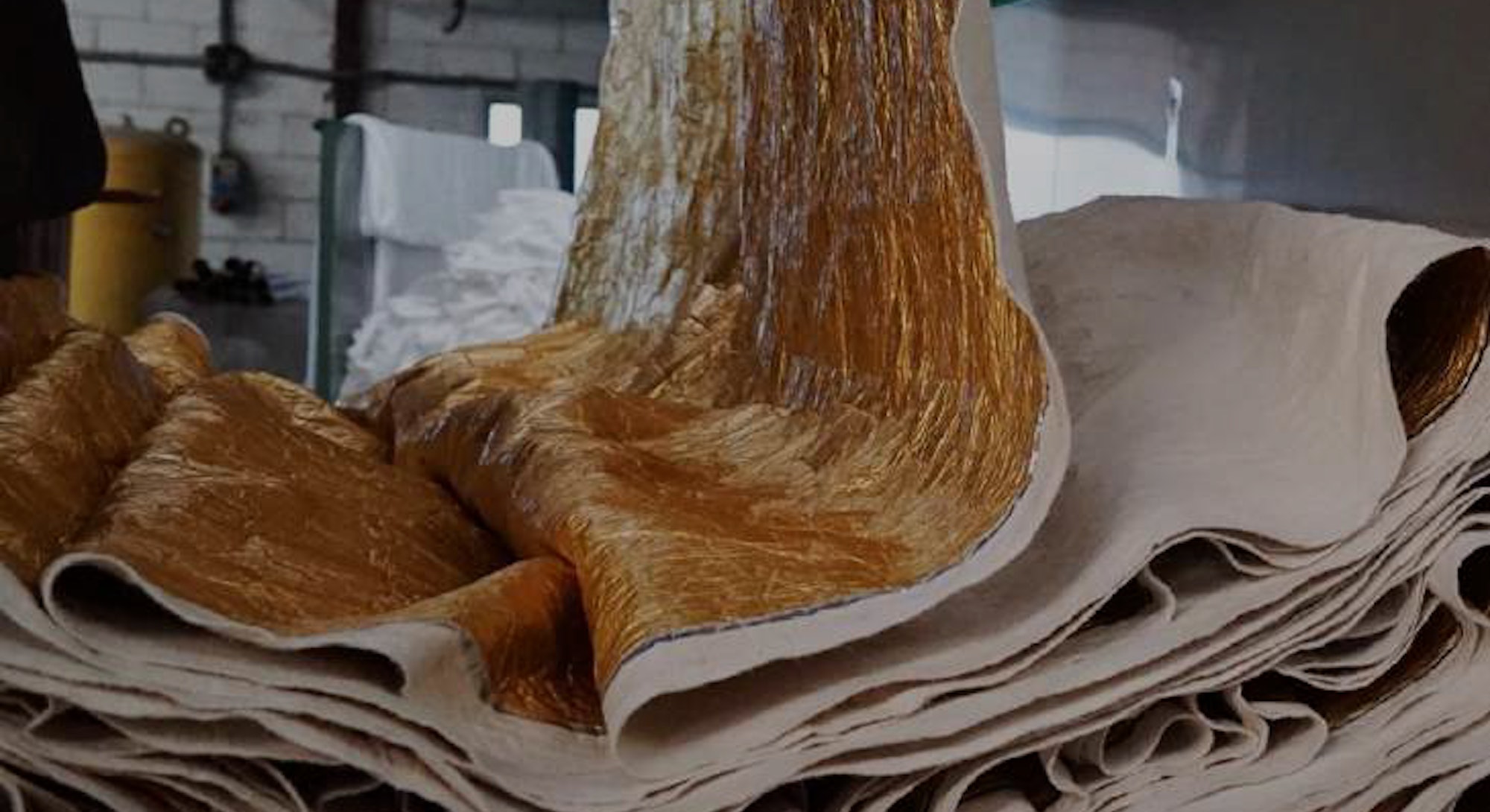 For decades, leather has been synonymous with luxury.

Whether the material graces cowboy boots, Chanel bags, or Drake’s custom Chrome Hearts Rolls-Royce, it serves a practical — and exclusive — purpose. Owning a leather piece guarantees lifelong quality, if you can afford its initial price.

Even the look of leather serves as a status symbol, prompting companies to appeal to consumers with “pleather,” an inexpensive lookalike material often made of PVC. But the animal-free alternative isn’t necessarily sustainable: Essentially just plastic, the textile doesn’t biodegrade like real leather, nor does it age well. After a few wears, pleather ends up in landfills, where it releases toxic chemicals into the ground and emits harmful gasses when burned in an incinerator.

As modern consumers continue to search for a leather alternative — driven by concerns of sustainability — more eco-friendly options have surfaced, implemented by major brands like Nike and Adidas. Genuine leather production comes with issues of animal cruelty, and livestock farming is a notorious source of greenhouse gases: Up to 10 percent of all greenhouse gas emissions in the United States come from agriculture, according to the Environmental Protection Agency.

Companies, fueled by profit, are more than happy to provide leather alternatives for their consumers. Nike has produced sneakers made from pineapple leather, while Adidas updated its Stan Smith model with mushroom leather. Now, the luxury market wants in on the sustainability market — but are its wealthy consumers willing to spend their piles of cash on something plant-based, rather than real leather?

Hermès has decided to test this theory by reworking its Birkin bag — the epitome of exclusivity in fashion — with vegan materials such as a mushroom leather substitute. Although the concept isn’t set to launch until later this year, the mere idea contradicts Hermès’ luxe history: The brand built its reputation by offering the finest calfskin, crocodile, lizard, ostrich, and alligator leathers, which have most famously dressed its iconic Birkin bag.

Applying Hermès’ renowned leather process to a leather alternative could result in an equally grand Birkin, though it’s worth wondering whether the animal-free iteration would see the same demand as the original. Hermès would likely manipulate the market — it does already, limiting how many Birkins are made and sold each year — and the vegan version of the purse would presumably be kept to the same rigorous standards as any Birkin.

Currently, the bags can take months or even years to obtain as they can’t be ordered online and ordering one in-store requires consumers to remain on a waiting list. A hefty price tag from $8,500 to $2 million also keeps demand at bay.

Still, brands like Hermès wouldn’t be producing a vegan Birkin unless demand already exists, says Sara Anne Leeds, founder of Rhymes with Orange, a sustainability blog and secondhand market. “It’s a company and it exists for profit,” she tells Input. “If its supply chain had been operating fine with real leather, the only reason it would change its leather is because consumers were demanding sustainable alternatives.”

Changing a decades-old practice won’t deter luxury-seeking customers, either, says Leeds. “To the untrained eye, luxury pertains to clout and labels,” she claims. “But luxury is considered luxury because of quality craftsmanship.” While an Hermès logo will still mean exclusivity, the label also guarantees a well-made bag, no matter what material — which also justifies a premium price, says Leeds. After all, a Birkin is a Birkin.

As an avid thrifter and pescatarian, Leeds tries to lead a sustainable lifestyle. But shopping ethically isn’t necessarily about buying eco-friendly products, she says — it’s about using what’s already available. Regardless of what material brands like Nike and Hermès are using, they’re still producing new products, says Leeds. And creating more goods, no matter how sustainable, is counterproductive: The eco-friendly wares will either end up in a landfill after use or take the place of an existing product deemed less ethical (and less worthy of continued use).

No one (in their right mind) would toss out a vegan Birkin — but attaching a recycled or vegan label to a product may actually promote overconsumption and waste, notes Leeds. “If consumers spend $4,000 on a Gucci bag, they’ll keep it around,” she says. “But with a recycled label, consumers may think they don’t have to keep it for long, thinking the product will have a low impact [on the environment] once put in a landfill.” Truly, the most responsible leather alternative is buying real leather second-hand, says Leeds.

“Sustainability is not only about the environment, but also about social and economic impact.”

Being a responsible consumer also means doing research — many “sustainable” products are only marketed as such with words like “ethical,” “organic,” “conscious,” “transparent,” and even “sustainability” itself. The buzzwords are stamped onto a multitude of products in hopes of luring unsuspecting consumers (and their coins).

Catering to demand for eco-friendly products, brands have begun to “greenwash” their goods: falsely promoting sustainable claims to keep up with changing consumers, while still cheaply and harmfully producing clothes. Only by keeping brands accountable, says Leeds, are we able to indulge in products that are truly ethical.

Ananas Anam, a company founded to combat the environmental impact of mass leather production, prides itself on providing a sustainable — and accessible — alternative to leather. The company told Input that “sustainability is not only about the environment, but also about social and economic impact — these three pillars need to be considered together to make a product or process sustainable.”

In producing Piñatex, its natural leather alternative made from pineapple leaf fibers, Ananas Anam uses a byproduct of the agriculture industry. No extra land, water, or pesticides are required to produce the raw material, which is made of 72 percent pineapple waste, says the brand.

According to Ananas Anam, global pineapple agriculture results in approximately 13 million tons of waste per year — and by using the waste of the top ten pineapple growing countries, the brand says it could theoretically replace over half of the global leather production without planting a single pineapple. As of now, however, Ananas Anam is focusing on its sustainable social impact, making Piñatex accessible to anyone who wants to use it.

“Piñatex is the only alternative material that is commercially available at scale today,” a representative for the brand told Input. “We have always prided ourselves to be accessible and open to everyone — we have an online store where everyone can just buy their material.” Whether it be a personal project or a Nike sneaker, Piñatex is making sustainability accessible.

Data from production and wear tests have been made just as accessible on Ananas Anam’s website, letting consumers research where their products are coming from. And to avoid confusion — as well as greenwashing claims — Piñatex is not considered pineapple leather, vegan leather, or pleather as “the term leather is reserved for animal hides only,” Ananas Anam says. “Piñatex, unlike leather, is a plant-based material and no animal derivatives are used,” the brand notes, offering terms like non-woven textile, plant-based material, and vegan to describe its PETA-approved leather alternative.

Mycoworks, the biotechnology company responsible for Hermès’ current leather-free bags, follows a similar ethos. Reishi, the company’s mushroom leather substitute, is not considered a replacement to leather, but rather “a completely new material with its own characteristics,” Mycoworks tells Input. Working closely with traditional leather craftspeople, the company is able to produce luxury-worthy products, it claims.

“This is a level of control that isn’t possible with animal leathers.”

“Brands and consumers are not going to sacrifice performance for sustainability,” a representative for Mycoworks shares. And by using the company’s Fine Mycelium process, sheets of Reishi material are able to be customized for thickness, weight, shape, and other features — allowing Reishi to essentially be “made to order,” the company says. “This is a level of control that isn’t possible with animal leathers.”

Such control is crucial to the sustainability of leather alternatives — these products wouldn’t be as eco-friendly if they created immense amounts of waste. But control also plays a part in capitalism, which breeds innovation and more notably, competition. There’s money in making environmentally conscious leather substitutes, meaning other brands are bound to produce the goods in hopes of profit, and not necessarily sustainability.

Keeping with its reputation for exclusivity, Gucci has created its own leather alternative called Demetra. Composed of 77 percent plant-based raw materials, according to the brand, Demetra uses Gucci’s own leather tanning procedures, offering customers a similar leather experience in terms of aesthetics, feel, and quality. Gucci has yet to disclose how exactly Demetra is sustainable, only noting the material includes “bio-based polyurethane,” viscose, and sustainably sourced wood compounds.

The luxury brand expects to incorporate the material into shoes, bags, accessories, and apparel — but only its own in-house products. Through patents and trademarks, Gucci has ensured that Demetra is exclusive to its own products, but by 2022, the label expects to share its material with other brands.

“There’s competition in capitalism; that’s how it will always be,” says Leeds. To her, Gucci wanting exclusivity isn’t necessarily a bad move for sustainability, but rather a move to protect its luxurious – and limited — image. “There’s a reason Apple exists and Android exists,” Leeds says. “Brands are entitled to a sense of exclusivity over their product.”

As more leather alternatives begin to appear, consumers will be able to explore a myriad of eco-friendly products. Gucci may be out of most shopper’s budgets, but leather-free options are bound to trickle down to affordable retailers. But in order to remain sustainable, as Leeds notes, leather alternatives need to be made for demand, without excess waste. After all, what good are sustainable styles if they still end up in a landfill?