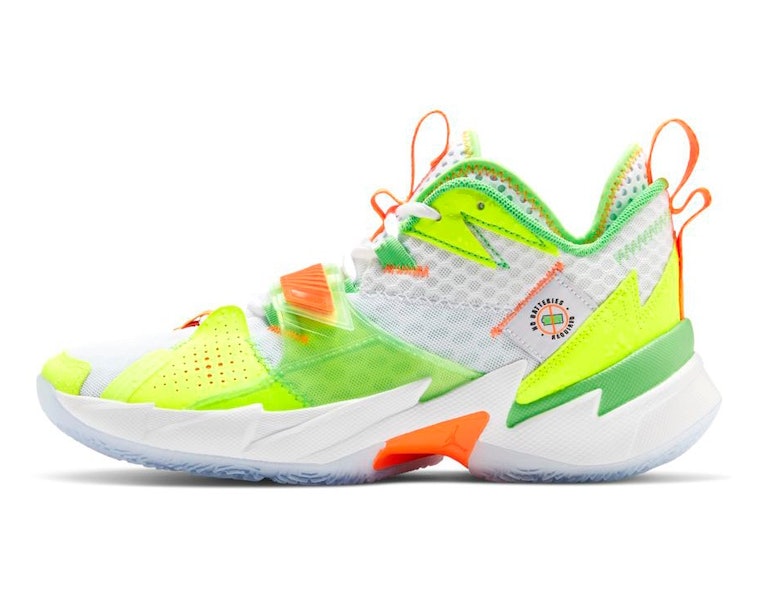 Russell Westbrook's Jordan line is getting two new sneakers inspired by his past. The new color treatments take on significantly different tones, with one Why Not Zer0.3 inspired by the Super Soakers he (and all of us) used to play with as children. The other take on his third signature sneaker carries a heavier back story, as it honors his best friend and teammate who died on the court at 16 years old.

The 'Splash Zone' — The more playful sneakers have been dubbed the "Splash Zones" and take on an instantly recognizable color scheme with neon green, orange, and yellow culled from the elite water guns. Other details reference the toys, the best of which is the "No Batteries Required" tag near the rear of the shoe. Water droplets also feature throughout, most prominently on the insole in combination with the Jumpman logo. To complete the package, literally, they'll come in a display box similar to the ones Super Soakers are sold in.

For those who haven't picked up a Super Soaker in far too long, these sneakers can be a fun blast of nostalgia. How could you not smile when looking at these kicks and reminiscing about all those you've Super Soaked? On other sneakers, the reference may not have worked as well — but Westbrook's are crazy and dynamic enough to capture all the chaos the Super Soakers reign.

Honoring Khelcey Barrs III — Westbrook and his best friend, Khelcey Bars III, both had dreams of going to UCLA and playing with each other before Bars died of an enlarged heart during a pickup basketball game. Because Westbrook says him and his friend were "always ready to go to battle for each other," this Why Not Zer0.3 takes loose inspiration from camouflage with a combination of green and several shades of brown. A more literal reference comes with a "KB3" patch appearing in the same place as "No Batteries Required" on the other shoe.

A pair of release dates — The "Splash Zone" Why Not Zer0.3 is dropping first, as it'll hit Nike's site Thursday for $170. The "KB3" will follow up on May 11 with a wider release for the same price. Whichever route you go, if not both, it's cool to see Westbrook invoking two distinct emotions with his signature sneaker. The best sneakers always come with a good story, which both of these deliver.