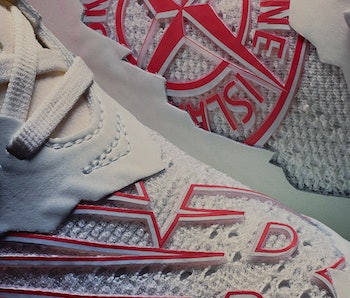 After months of teasing, Stone Island and New Balance have finally unveiled their first collaborative sneaker. The landmark partnership comes under New Balance’s Tokyo Design Studio, the experimental offshoot responsible for some of the brand’s most innovative kicks throughout its recent resurgence. Stone Island, too, is no stranger to material innovation — and the meeting of minds doesn’t disappoint.

The Italian luxury outdoor brand has transformed New Balance’s RC Elite into the RC ELITE_SI | NB_1, a clunky name for a gorgeous pair of kicks. Similar to the recent Extra Butter 2002R’s, this new sneaker appears as if it’s been decaying for centuries. 3D printing has created a richly textured upper that looks like it’s been worn away to reveal a knit fabric and mismatched logos across the left and right sneakers.

Ingenuity isn’t confined to the sneaker’s appearance, though, as it’s packed with technology to make it a bonafide racing and training shoe. And now that we’ve seen its first pair of kicks in full, Stone Island looks to be one of New Balance’s most outstanding collaborators going forward.

The specs — Made entirely with 3D-printed materials, the RC Elite’s upper is both lightweight and breathable with a vamp tailored for racing. Beneath it is a midsole that combines New Balance’s most advanced FuelCell cushioning with a carbon fiber plate to maximize energy return and provide “360-degree functionality.” A cutout at midfoot helps reduce the midsole’s weight, as do perforations on the outsole with the additional benefit of traction.

New Balance’s streaking race logo defines the right sneaker, while the right shoe swaps for Stone Island’s iconic compass mark. It’s hard not to think of the artist Daniel Arsham when looking at the faux-aged kicks, but nonetheless the RC ELITE_SI | NB_1 may just be the most attractive performance sneaker in its weight class.

The two collaborators will roll out their debut sneaker in phases beginning with a “preview” from October 7 through October 10 at Stone Island’s flagship stores. There, you’ll be able to order pairs through an iPad, with a general release on Stone Island's website to follow October 12.