"The goal is to make sure I'm not one of the few, but one of many in my industry." 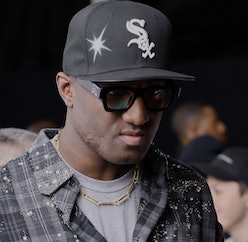 It looks like being turned into a meme had a positive effect on Virgil Abloh, the founder of Off-White and Artistic Director for Louis Vuitton menswear. Ever since the internet ridiculed him over a $50 donation he flexed on Instagram, and siding with store owners instead of protesters as streetwear shops were looted across the U.S., Abloh has been actively finding ways to help causes fighting to protect Black lives and against racial injustice. That includes auctioning an unreleased pair of Off-White Air Jordan 4s, which ultimately raised over $180,000, as well as working with brands such as Ikea to let people bid on furniture from his personal collection. But his latest contribution may be the most important one yet.

For the new creatives — Abloh has announced that he is launching a scholarship fund for Black fashion students, which so far has raised $1 million, and that initial seed amount might grow in the future as more companies and people from the industry join to support it. Dubbed Virgil Abloh™ "Post-Modern," the initiative was created and will be managed in partnership with the Fashion Scholarship Fund (FSF), an organization Abloh describes as "the foremost fashion-oriented education and workforce development nonprofit in the U.S."

In an Instagram post, Abloh said that his goal is "to make sure I'm not one of the few, but one of many in my industry..." He also touched on his meme status and becoming synonymous with the number 50, saying, "I'm putting money, my resources, and my rolodex where my mouth is... just keeping it 'Two Virgils' or more accurately 'That many Virgils.'" While Abloh has clarified that he has actually donated over $20,000 to "bail funds and other causes related to this [Black] movement," it seems as if people turning the screenshot of his $50 donation last month into the butt of a joke pushed him to make his contributions more public — and to do even more than he was before.

Only the beginning – According to Abloh, scholarships from his "Post-Modern" fund will help more than 100 students and be awarded over a multi-year period, with more detailed information to be revealed later this summer. "The Abloh Fund’s mission is to foster equity and inclusion within the fashion industry by providing scholarships to students of academic promise of Black, African-American, or of African descent," he said on his site. "In addition to funding, the Post-Modern Scholarship provides additional support to make its mission happen in the form of mentorship, information and support services."

Abloh added on Instagram that he's "forever fighting for the 17-year-old version" of himself, and being able to set up a scholarship fund to help up-and-coming Black designers is all part of that. "What that specifically means is... all i want is for any young Black kid to achieve a shorter path to their career goals," he said. "And if I can help with an open source approach to opening doors or messaging 'how-i-did-it' along the whole way, then I've done my real job, not my actual job.⁣"