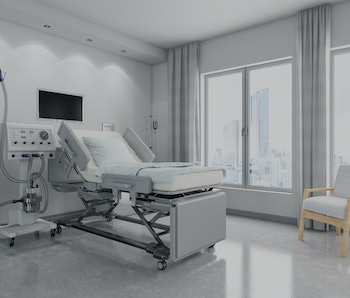 Ventilator shortages have become a major issue in the fight against the deadly COVID-19 coronavirus pandemic. They're necessary in saving lives because ventilators provide mechanical breathing to patients whose lungs have become inflamed as a consequence of contracting the virus. As manufacturing companies from GM to Dyson scramble to begin production of the devices in scarce supply, other creative solutions have emerged to fill the gap.

Software engineer Trammell Hudson found that it's actually possible to repurpose existing CPAP machines to function as ventilators with not much more than a simple software update, which he released today as an open-source project called Airbreak. The solution is just a proof-of-concept and needs some modifications, but as Hudson notes, repurposing the many CPAPs that are already out in the wild could ease the ventilator shortage until more medical-grade ventilators are ready. Ramp up of mass production is expected to take months, and in some places the shortage has gotten so severe that hospitals are experimenting with little tested solutions, like putting two people on one ventilator.

Critical equipment — For those who don't know, CPAP machines are medical devices intended to treat sleep apnea by delivering constant, mild air pressure to the lungs, ensuring the airways remain open. Ventilators need to be able to provide higher air pressure, however, since they're replacing a person's breathing altogether. They also need to oscillate airflow so the patient can easily breath out. The Airbreak software "jailbreaks" the CPAP machine to boost its maximum pressure output and adds a ventilation mode that allows the machine to drop its air pressure at a customizable breathing rate so the user can release the air being delivered to their lungs.

The machine Hudson used to make his jailbreak is an AirSense S10 (pictured above), a CPAP machine that retails for $1,000. For context, the ventilators commonly found in hospital ICUs are much more feature-rich but typically cost between $25,000 and $50,000.

Hudson says that there exist "millions" of underutilized CPAP machines sitting in closets around the country, and another 500,000 units in warehouses. If this hack gets the green light for use on COVID-19 patients — something Hudson is consulting with doctors on — the potential is immense. Similar BiPAP devices have already been approved by the FDA for use as emergency ventilators (vindicating Elon Musk, who was initially criticized for donating BiPAPs). There just need to be some changes made in order to make BiPAPs safe in a hospital environment. The biggest one is experts have said a viral filter needs to be added so that any air containing the virus doesn't spread from someone's lungs through a hospital.

Other engineers have been racing to create low-cost, DIY ventilation solutions of their own. MIT is developing its own open-source version that's supposed to cost only $100 using affordable parts. It has not ever been tested in a real world environment, however, and needs to be manually operated by a human physically pumping the device. Over in Israel, a group of medical professionals recently released their own open-source design called the AmboVent. This, again, has not yet been tested on an actual patient, but the group says the AmboVent design complies with standards for treating COVID-19 patients while being simple enough that it can be constructed with tools available to even small manufacturing firms.

If you want to learn more about Airbreak, Hudson has a full explainer here. Since the software is open-source, anyone can take a look inside and contribute to the project.

More like this
Jackson Chen
6.22.2022 11:00 PM
This Thing Rules
Why I bought this knockoff Theragun and you should too
Chris Stokel-Walker
6.13.2022 8:18 PM
Chronic illness
COVID long haulers are sharing their realities on TikTok
Jackson Chen
6.24.2022 6:30 PM
Tech
This open-frame case lets you build a beastly portable PC