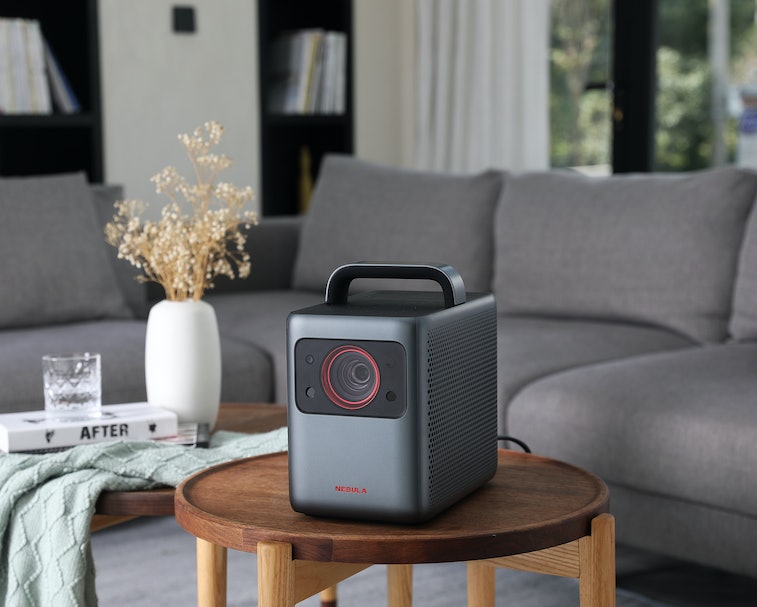 We might never have to deal with the most annoying parts of the movie-going experience: chatty moviegoers, crying babies or mid-row people getting up in the middle of the movie. Anker wants us to embrace home theaters and debuted its Cosmos Laser 4K projector during CES 2022.

The laser projector is the brightest projector in Anker’s Nebula lineup so far, meaning we might not have to wait until it’s dark out to start the movie. The design features a hefty, ergonomic handle that makes it look more like a portable generator or battery, but it means you can set up any part of your house as a mini-movie theater. It seems like Anker was going for the best of both worlds by combining its previous Mars II Pro portable handle design and the 4K quality of its Cosmos Max to have a high-brightness projector that can be brought anywhere.

Still, the chunky design of Anker’s latest laser projector is not as compact as Samsung’s latest Freestyle projector that it also revealed at CES 2022. Unlike Samsung’s Freestyle traditional projector design, the Cosmos Laser 4K projector uses freakin’ lasers. But seriously, laser projectors usually require less maintenance and have better energy efficiency. Also, Anker does have a previous model that’s about the size of a soda can.

Turning up the brightness — The Anker Nebula Cosmos Laser 4K projector uses ALPD 3.0 laser technology bringing it up to 2,400 ANSI lumens. The latest projector will be a noticeable jump in brightness from its Cosmos Max that previously offered the lineup’s highest brightness at 1,500 ANSI lumens. With the higher brightness, Anker’s latest projector may even be more usable during the day, at least indoors. The Cosmos Laser 4K can project a screen up to 150 inches and in 4K resolution, like its name suggests.

Setup is supposed to be a breeze according to Anker, who said the Cosmos Laser 4K is ready in three seconds with its InstaSet Display Technology that has auto-keystone and auto-focus capabilities. The chunky projector has two built-in 30W speaker systems on the side and features audio equalizing from Dolby Audio to give you that real theater-like experience.

Home theaters ain’t cheap — Anker is planning to start pre-orders for the Cosmos Laser 4K on January 11 through Kickstarter, with an expected product ship sometime in March. But the home theater experience with Anker’s latest laser projector will cost you $2,199. The company is apparently also offering a 1080p version that is expected to cost $1,599. And if you don’t have the money for Anker home-theater experience, well, I guess you run the risk of being infected in a theater full of strangers.