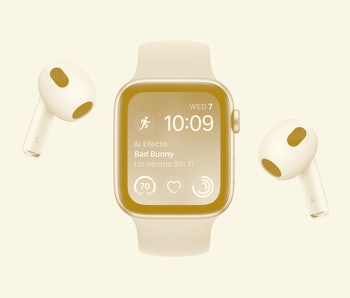 After its introduction in 2020 alongside the Apple Watch Series 6, the Apple Watch SE is finally getting an upgrade. The new 2022 Apple Watch SE uses more or less the same recipe — older parts, plus an older design, with modern software support — to create a more affordable alternative to the company’s high-end smartwatches.

A new SE — The new Apple Watch SE features the same basic design as before, with a screen that’s 30 percent larger than the Series 3, all of the usual health sensors (heart rate monitoring and step tracking), and the same motion sensors as the new Series 8 for crash detection. Inside, the Apple Watch SE is also using the SiP 8 (system in package) from the Apple Watch Series 8, which Apple says is 20 percent faster than the previous version.

As before, the Apple Watch SE is compatible with previous Apple Watch bands and comes in a variety of different sizes and finishes. You can get 40mm or 44mm, in either silver, midnight, or starlight colors.

The new “Low Power Mode,” which turns off features like automatic workout tracking and the always-on display on more expensive watches, means the second-generation Apple Watch SE should also get an even longer battery life.

Steep competition — The affordable smartwatch space has only gotten more competitive since the last Apple Watch SE update. Fitbit just introduced new smartwatches with even more features than the Apple Watch SE, for a comparable price, that works on both Android and iOS. Obviously, Apple’s tight control of its platform means it’ll always offer deeper integrations than any of its competitors, but the reasons to get an Apple Watch SE over something more affordable or feature-rich are worth thinking about.

The Apple Watch SE will start at $249 and is available to order today for a ship date of September 16.