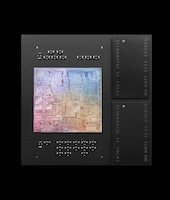 The number of cores rumored to be coming to Apple's next in-house processor.

Apple is already getting ready to introduce successors to its in-house M1 chip — and they’ll be even more incredibly powerful than the tech giant’s first offering. Bloomberg reports the second-generation Mac processors could be ready for introduction as early as 2021. And, eventually, Apple’s chips could have up to 128 dedicated cores. Yep, 128 cores!

Though Apple has yet to comment on its plans, introducing the next round of in-house chips in late 2021 would make sense for the company, being about a year from the launch of the M1 MacBooks. The 7- and 8-core MacBook Air and MacBook Pro 13-inch have already made an enormous impression on the computer industry.

The next series of chips would likely be introduced in updated versions of the MacBook Pro, high-end iMac desktops, and, later, a new Mac Pro, according to people familiar with the matter. Given the waves already created by the M1 chipset, it’s looking increasingly impossible for Intel to overtake — or even catch up to — Apple’s new lead.

The sky’s the limit — Apple’s approach to creating processors is simple: blow industry standards out of the water in favor of brash innovation and tight integration between hardware and software. Though the latest MacBook Pros and MacBook Airs will look very familiar to anyone with an internet connection, the laptops’ innards are anything but. As Input editor Ray Wong puts it, “the sheer amount of performance from the M1 is just unreal.”

Apple could theoretically stop right here, take a breather, and still be ahead of its competition. Instead — as Apple is wont to do — the innovation has only just begun. The next generation of MacBook Pro and iMac models could have up to 16 power cores and four efficiency cores, a combination that would effortlessly overshadow its current-gen processors... and much of the competition.

And while that iteration of Apple’s chip is in development, the company might even release a variation with eight or 12 high-performance cores as an in-between generation of Macs. We could see more powerful MacBooks in early or mid-2021, even.

Intel who? — For a very long time, Intel has been the gold standard for computer chips (though rival AMD has kept it on its toes). The company became the biggest chip-maker by revenue in 1992 and has only lost out on that title once since (in 2018, to Samsung). Though precise data is difficult to come by, Statista.com reports that approximately 80 percent of laptop CPU tests are done on Intel devices.

But Intel’s share of the chip market has fallen overall; in the third quarter of 2020, the company’s shares of all x86 computer processors fell to 62.6 percent — a 6 percent decrease year-over-year. Intel’s share of the CPU market peaked at around 82 percent in 2016. Its slow decline has largely been due to the prevalence of AMD processors on the market.

Even with those steadily falling shares, though, Intel’s innovation has continued to be a pacemaker for the market as a whole. At least, until now. But Apple’s immense store of resources — both in terms of skilled innovators and in terms of cold hard cash to pump into research and development — has allowed it to pull ahead of Intel, and will likely continue to change its former partner, now rival's, fortunes.

According to Bloomberg, an Apple chip with 32 high-performance cores could be coming our way as soon as 2022. We can't wait.