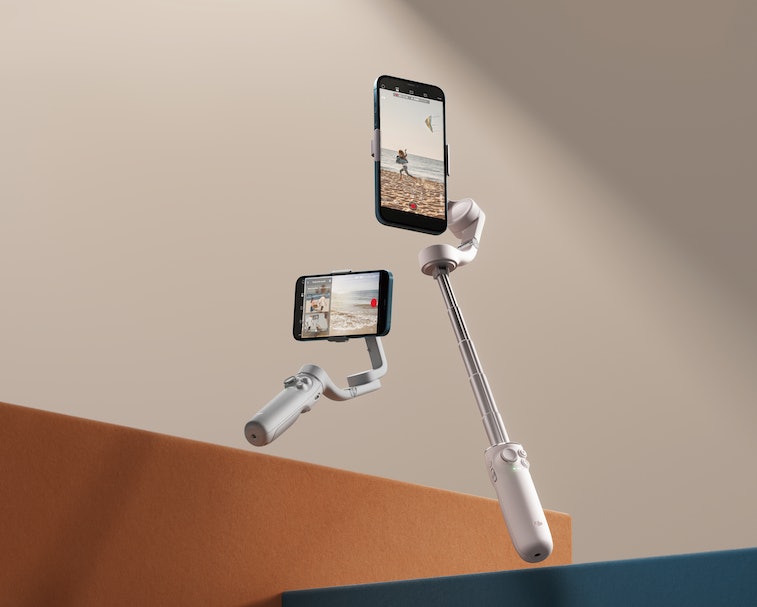 DJI is best known for its drones. Less known is that the company makes great smartphone essentials like its Osmo Mobile gimbal.

Since the original launched in 2016, Osmo Mobile gimbals have become a staple phone accessory for many people, including influencers, YouTubers, and even professionals. The original model was $299; it was clunky and had terrible battery life. But that’s a thing of the past.

Today, DJI is announcing the Osmo Mobile 5 (OM 5), which makes significant improvements over last year’s OM4 with an even more compact design and a telescoping pole for better selfies and extra reach. Let’s unpack everything we know about DJI’s new OM 5 phone gimbal.

When is the Osmo Mobile 5 available? and how much does it cost?

The Osmo Mobile 5 is available to purchase starting today from the DJI store, though you can buy it from retailers at a later date. The OM 5 comes in two colors: Sunset White and Athens Grey. The Sunset White has a hint of pink in the right light. At $159, the 3-axis stabilizer Osmo Mobile 5 won’t break the bank, but it’s worth noting that it’s $10 more expensive than the Osmo Mobile 4.

How can I take a selfie with the Osmo Mobile 5?

While you can simply stretch out your arm to get a selfie with the OM 5 gimbal, previous Osmo Mobile models couldn’t compete with rival gimbals like the $50 Zhiyun Smooth X when it came to selfies. The Smooth X’s telescoping rod for extending the length of the device really set it apart and gave it an edge over the OM 4.

The new Osmo Mobile 5 has an identical feature with an 8-inch telescoping rod that contracts into the handle when not in use. While a selfie stick does something similar, the 3-axis stabilizer can provide the same footage but much smoother, even as you walk around a city or trail.

How big is the Osmo Mobile 5?

Similar to the Osmo Mobile 4, the Osmo Mobile 5 folds in on itself for an even smaller form factor. After testing it for the past few weeks, the claim that it’s small enough to put in your pocket is true. DJI says the device is one-third the size of its predecessor, which is a huge improvement. With the Osmo Mobile 5 in your pants pocket, you can start shooting within seconds, as it takes no time at all to unfold and attach your phone, especially if it’s already fitted with the magnetic clamp.

How does the clamp on the Osmo Mobile 5 work?

Again, like the Osmo Mobile 4, this updated stabilizer uses magnets to join the phone clamp and the device. A clamp with a magnet goes on the phone, and the OM 5 has another magnet. When you need to use it, all you have to do is let the magnets do their job. It’s a clever solution that makes it easy to quickly attach the phone to the OM 5 instead of having to clamp the phone every time.

There is one new change this time around that should please many customers. DJI heard users’ complaints that the clamp didn’t play well with phones with thicker cases so it made the clamp with deeper vices to accommodate bulkier handsets. The Nokia XR20, which I recently reviewed, is a very big boi, but it managed to fit and stay on. It was at the limit of what the clamp could handle, but it worked out.

What’s the battery life on the Osmo Mobile 5?

Battery life on the Osmo Mobile 5 is 6 hours. As always, battery life recommendations from the device maker should be taken with a grain of salt since devices are likely to be tested in lab conditions. What’s interesting is that DJI cut down the size while keeping battery life at similar levels as the OM 4. As impressive as that it is, I’ll have to do some testing to find out the real battery life. Regardless, the device can get a full charge in 1.5 hours. A USB-C cable is provided; a power brick is not.

What shooting modes are on the Osmo Mobile 5?

There’s a lot you can do within the DJI Mimo app. Of course, timelapse, motionlapse, and hyperlapse are to be expected at this point, as well as a panorama shooting mode. The latter has three modes of its own, including the “Clone Me” mode that can stitch together multiple shots of the same person as it takes a panoramic image. In the right creative hands, the feature can be used to capture hilarious shots that you can’t get out of a regular phone camera unless you use Photoshop. The “Spin Shot” is also back, rotating the phone while using other shooting modes to create a spinning effect.

Another Osmo Mobile 4 shooting mode that is on the Osmo Mobile 5 is the Dynamic Zoom; it recreates the dolly zoom effect made popular in the Alfred Hitchcock movie, Vertigo. You won’t always use these modes, but they can create some pretty cool shots when you want to show off. You can also use gesture controls to activate certain functions. If you have your Osmo Mobile 5 on a tripod, you can use this mode to track you and take an image or video.

Can I track subjects with the Osmo mobile 5?

Yes, and the ActiveTrack feature is getting an update. ActiveTrack 4.0 adds the ability to track subjects at up to 3x zoom at 5 meters per second. I used ActiveTrack 4.0 on my cat and it tracked him around the living room, even when he spazzed out and ran around. To track faster subjects more accurately, you can also turn on Sport Mode. I suspect that turning on Sport Mode may use up more of the battery, otherwise, it would be the default mode.

What is the ShotGuides feature on the Osmo Mobile 5?

ShotGuides is DJI’s solution for people who may not be as savvy with editing video. ShotGuides holds your hand by prompting you to shoot certain scenes based on your environment. Depending on the template chosen (e.g., landscapes, sports, pets, etc.), the app will tell you what to shoot and then cut a video together at the end — it even throws on a filter and music, which depends on the template. Just like that, you can have a video to share. It’s a new feature for the Osmo Mobile devices, and one that DJI claims is a “first” in the industry.

Are there new accessories for the Osmo Mobile 5?

There is one new accessory, and it’s so obvious that I’m surprised it wasn’t available before. The Fill Light Phone Clamp has diffused LED lights on both the top and bottom and replaces the included phone clamp. There are three temperature settings for the LED lights, with three brightness settings to adjust. Pressing the power button cycles between brightness levels and turns off the device after the third click, the small thermometer icon button changes the color temperature.

The device works independently of the Osmo Mobile 5 and has its own battery that is charged via the USB-C port. The Fill Light Phone Clamp is an incredibly useful accessory that can make shooting in low light possible, or the lighting can simply make you look better by adding definition and depth to the shot. The fill light is not launching at the same time as the Osmo Mobile 5; it will be available later on for $59.

What comes in the box?

The slightly higher price tag is easier to forgive when you consider just how much stuff you get. Apart from the OM 5 gimbal, the other accessories include a power cable, storage pouch, wrist strap, tripod, and a new magnetic clamp.