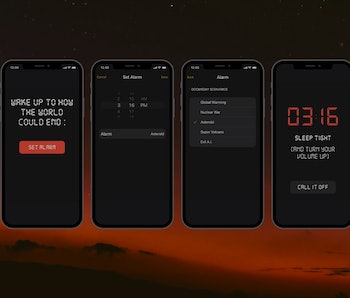 We’ll spare you all the clichés about how generally difficult it is to wake up most mornings, and skip right to the part about how hard it is to wake most mornings knowing that *waves wildly around* all this is going on. Existential dread has become a standard, free-floating feeling for pretty much anyone with even the most shallow comprehension of humanity’s various dilemmas, so why not just dive into the deep end of the dread pool each morning with the new Doomsday Alarm Clock app?

“Climate change could be irreversible by 2030. If we don’t act soon, our fate is sealed. Good morning,” concludes one particular choice, accompanied by tense orchestral string music. Who needs coffee with an alarm like that? In lieu of paying for the app, co-creators Steven Nass and Peter Henningsen made it free to all users, and they instead encourage everyone to make a donation to EarthJustice in order to avoid any actual doomsday on the horizon.

A customizable calamity — Co-created by Nass and Henningsen (the former of whom also had a hand in that anti-productivity Chrome extension), the alarm is pretty self-explanatory: Users pick from a number of different, genuinely plausible apocalyptic scenarios, opt for a designated wake up time, and then wait to be rousted by facts regarding each specific End Times situation. Current causes of mass extinction include a supervolcano, malignant artificial intelligence, asteroid strike, nuclear war, and, of course, good ol’ fashioned climate change.