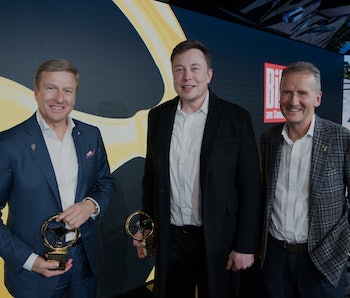 Tesla CEO Elon Musk tried to hire Volkwagen’s CEO Herbert Diess to take the reins of his electric car company back in 2015. That tidbit of news comes from Business Insider, which claims it got ahold of information suggesting discussions had reached an advanced stage.

Bromance — Diess, a longtime automotive executive, left a top job at BMW in 2014 and was nearly scooped up by Tesla before choosing to instead head for Volkswagen.

It’s not clear why he passed on Tesla. Diess and Musk have known each other for some time and are said to have an amicable relationship. Just last year, the Volkswagen CEO took Musk on a test drive of the ID.3 electric hatchback. Diess is reportedly a fan of Tesla and has invested in the company, even as he’s announced internal plans at Volkswagen to catch up with the rival with a goal to produce 1.5 million electric cars by 2025.

Few people know that Musk didn’t start Tesla but rather became CEO in 2008 after its original founders failed to release its first car, the Roadster. Thirteen years later he remains CEO, though he has said he doesn’t want to sit at the helm forever. Musk has plenty of other things he could use his time for, including running his other company, SpaceX, and continuing work on more nascent endeavors including Neuralink and The Boring Company.

EV transition — It’s anyone’s guess how well Tesla could have performed under the leadership of Deiss, one of the most respected executives in the automotive industry. But thanks to Musk’s tenacity and grueling work ethic, Tesla has defied all odds to do incredibly well.

The car industry is not a zero-sum game either; it won’t become a monopoly business like smartphones are today because automotive development is much more challenging to scale across the world. Tesla today primarily makes just two vehicles in mass volume, the Model 3 and Model Y. Under Deiss, Volkswagen has become the biggest EV maker in Europe, helping advance the transition to zero-emissions transport. Musk has said he’s fine with competition if it contributes to reaching that eventual future.