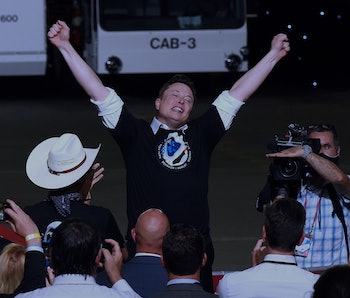 Elon Musk is many things: a con artist, a greedy billionaire, a tweeter with no filter — and, occasionally, a talented innovator. It’s looking like one of his most ambitious projects yet could soon be coming to fruition.

Musk tweeted Tuesday night that he’ll be showing off his brain-powered Neuralink computer later this week. He says there will be a live webcast of a working Neuralink device on Friday, August 28, at 3 pm PT.

The progress stream is set to show off the second version of the device Neuralink has created to implant its tech in humans.

For once, at least, it seems Musk is running on schedule. He’d tweeted in early July that Neuralink would be ready for a progress report on August 28.

When it comes to Neuralink, we still have way more questions than we do answers. Knowing Musk’s history, the device will either be a huge hit or a major miss — he doesn’t usually leave room for in-betweens.

I’m sorry, a brain-powered what now? — Yeah, we’re a little confused, too. Details on the actual functionality of this Neuralink device are scattered at best.

Musk first formed Neuralink back in 2017 with a characteristically galaxy-brain idea: connect humans to AI. Moreover, Musk wanted to create a device that would allow AI to be an extension of the human mind, essentially turning the brain into a supercomputer.

That’s the long-term plan. In the interim, Musk hopes to use the technology to assist people with brain injuries or congenital defects to live and operate in the world. Even this shorter-term goal is tricky, though; it’s not at all that easy to write new brain signals to restore bodily control.

There are some…concerns — If you’re wondering how Neuralink can possibly achieve its goals without being invasive, the answer is that it can’t. At least not right now.

The technology is inherently invasive. It requires the connection of skinny, flexible electrodes between four implanted N1 chips and the human brain. Making those connections requires drilling holes in your skull. Yes, they are small holes — eight millimeters wide at most — but it’s still drilling into your head.

And then there’s the problem of getting those flexible electrodes to stay put. Musk says one of the biggest challenges the company faces is developing electrodes that will last a long time; the brain and its surroundings are most likely to reject.

Musk’s vision for Neuralink is to eventually connect it to AI, thereby allowing users to complete tasks like typing by thought alone. But connecting your brain to the internet sounds dangerous, to say the least. No internet-connected device is impenetrable — what if a hacker gains access to your mind? The nihilist sci-fi situations Neuralink could put us in… let’s try not to think about it too much.

Musk believes Neuralink technology could be “revolutionary.” And, to be fair, it could be. Until then, it’s more of a dangerous pipe dream than anything else. Still, we will be tuning in on Friday to see what all the fuss is about.

More like this
Annie Rauwerda
5.12.2022 11:33 PM
Ethics
The AI-powered Am I the Asshole spinoff is back and better than ever
Ian Campbell
5.16.2022 5:45 PM
Tech
Uber is piloting two types of robotic food deliveries in Los Angeles
Chris Stokel-Walker
5.23.2022 5:35 PM
Literature
I had Google AI narrate my audiobook. The results were... not terrible.