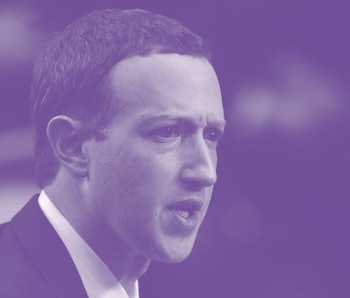 Facebook continues to dig in its heels on letting Donald Trump post incendiary statements without consequence. The Twitter account @suspendthepres, which gained notoriety for reposting Trump’s tweets verbatim and getting suspended, took to Facebook to see just how committed to free speech the platform really is. After about a week, the same post that caught Twitter’s eye was removed for violating Facebook’s community guidelines. Without explanation to the account holder and following news coverage, Facebook reinstated the post claiming the removal was an error.

Facebook seems confused — Though CEO Mark Zuckerberg might be personally “disgusted” by Trump’s increasingly overtly racist social media rants, he’s intent to hide behind free speech to keep Facebook in the good graces of its conservative users. Zuckerberg’s alleged conscience came after employees voiced their own disgust against Facebook’s stance and acted on it, from a virtual walkout to outright leaving the company.

Confronted with the same post the platform and Zuckerberg himself upheld, Facebook removed the post, deeming it harmful. A couple of hours after Vice released an article about the incident, however, the post was reinstated without pomp or circumstance.

A slippery slope — This all goes back to Facebook’s insistence on allowing political ads to be a Wild West environment. Though the company has broadly pushed to take down misinformation, its moderation systems are lackluster. Facebook might catch some misleading census ads or let ads literally promoting violence run for days.

This cascades into the rest of Facebook. By trying to keep everyone in the conversation, the platform knowingly fuels the growth of racist groups and the radicalization of its users. Even when it stops promoting these groups, they don’t receive more serious consequences.

Now, even though Zuckerberg and his moderators know that “when the looting starts, the shooting starts” incites violence, Facebook is allowing regular users to get away with Trump’s rhetoric. While there are unclear legal implications to simply removing Trump’s posts and possibly his accounts (Trump himself regularly deletes tweets which are meant to be preserved), other platforms have shown it’s possible to minimize his harmful influence.