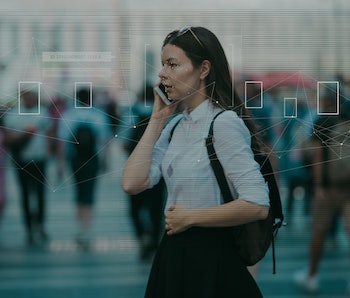 While we’ve been able to point a finger at Clearview AI, there are at least dozens more facial recognition software companies out there operating without government oversight. The only reason we know about these 47 companies is thanks to the competitive vendor list crafted by the U.S. National Institute of Standards and Technology (NIST), as reported by OneZero.

The big guys — Maybe you don’t think of the folks behind RealPlayer as “big,” but they’re making waves as RealNetworks. A subsidiary company SAFR allows them to dispense facial recognition technology to K–12 schools, military drones, and local law enforcement’s body cameras. Japan’s legacy tech company NEC has exponentially built out a biometrics division. Toshiba is running more than 1,000 facial recognition projects around the world, Microsoft is influencing legislation, and various corners of Amazon benefit from the technology.

The little guys — These might feel more approachable, but when you use the example of Clearview AI, you can see how easy it is for these unknowns to fly under the radar before entering the public consciousness. Following a blistering NBC News report, Ever AI rebranded as Paravision, so we’re also playing a game of civil liberty whack-a-mole.

Despite this surprisingly hefty list, there are reportedly hundreds of vendors selling facial recognition software. We only know about these 47 because of the cachet that comes with hitting NIST’s benchmarks for the technology. Meanwhile, unchecked companies are helping the likes of corporations and law enforcement keep track of us.