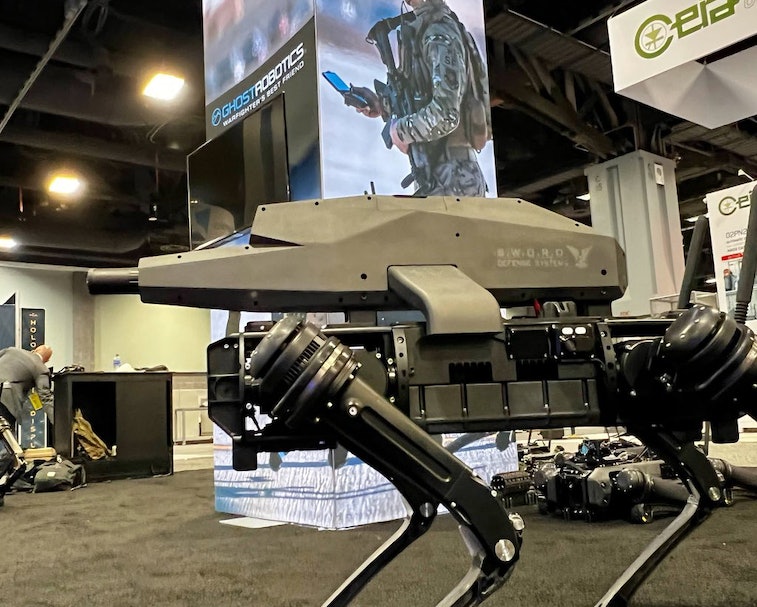 The dog-shaped robot body that’s been creeping its way into the mainstream has already been seen to be terrifying and awfully capable, but that design is about to get even more dystopian. The SPUR (Special Purpose Unmanned Rifle) is essentially a robot dog with a rifle for a backpack. We don’t know about you, but we would definitely sleep easier if it didn’t exist.

Ghost Robotics teamed up with SWORD International (a semi-automatic rifle company) to create the specialized demon beast. The SPUR debuted this week at the Association of the U.S. Army’s annual convention in Washington, D.C. The Drive reports that, while the SPUR is by no means the first robot dog the U.S. Army has experimented with, it's the first to include a live weapon on its back.

Not to be all doom and gloom on main, but the prospect of a lithe robot dog — a semi-autonomous one, at that! — with the ability to shoot a semi-automatic rifle is downright nightmarish. Wasn’t the ability to drag victims into mines violence enough?

Rifle dog — Little is known about the SPUR, save for the fact that it is, indeed, a semi-automatic rifle strapped to a semi-autonomous robot. Neither Ghost Robotics nor SWORD has released much info to the public about the robot; it’s unclear how much ammunition it can hold or how autonomous it really is. This opacity isn’t comforting.

The SPUR is capable of precision fire from about 4,000 feet, according to information the company provided to The Drive, and it can be controlled remotely. The bot has the ability to turn a gun’s safety on and off from a distance and has a sighting system for locking onto targets.

Trained to kill — Here’s what is clear: The SPUR is a deadly weapon. Its sole purpose is to carry a rifle and use it when necessary. The idea here isn’t really very novel, honestly. The Army has been utilizing drones for deadly strikes for more than a decade now, and this is essentially the land-bound version of that. Still, the SPUR’s very nature is sending up red flags across the internet, even on Ghost Robotics’ own Instagram account.

“It’ll be committing warcrimes in the middle east/asia within the decade. Congrats,” one commenter wrote.

Any robot built with the intent to kill is immediately concerning. Even if a SPUR army doesn’t turn sentient and destroy society as we know it, we should be wary of machinery created for the sole intent of destroying human life. The NYPD loved using its robot dog for patrolling before caving to public backlash and retiring it. We just know some sheriff somewhere is already plotting how to use under-the-table funds to buy a few of these.

Even without the rifle backpack, the proliferation of these four-legged robots is really very unnerving. Suddenly the Tesla Bot is looking a lot more attractive... at least until someone gives it a gun.

More like this
Andrea Carrillo
Sep. 13, 2022
Style
Nike made a robot to clean and repair your sneakers
Jackson Chen
Sep. 17, 2022
Tech
Zero’s long-range e-motorcycle is a beast on and off the road
Jackson Chen
Sep. 15, 2022
Tech
Unagi goes all in on subscriptions, scraps premium Eleven model