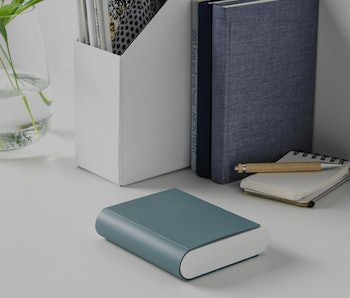 Other than inexpensive furniture, one of Ikea’s greatest gifts to mankind is its home electronics that don’t ruin your apartment’s aesthetics. Joining the ranks of that hallowed collection is a new AA and AAA battery charger called the Tjugo, which, besides being functional, will also blend into the background when not in use.

That’s because the Tjugo folds up to look just like a book. Mind you, it’s not the most convincing fake book we’ve ever seen — Ikea hasn’t provided the charger with a fake title or cover art, just a plain teal cover — but it’s definitely a lot nicer to look at than your average battery charger.

The charger, which connects to a removable wall adapter via a 1.5-meter cord, includes four slots for AA batteries and four additional slots for AAA batteries. Ikea says the total charging time will vary depending upon which rechargeable batteries you use. The good news is that, no matter which batteries you charge with the Tjugo, it’ll shut off automatically once charging is complete, greatly increasing the lifespan of your batteries.

The only catch: It’s not available in the U.S. just yet.

Batteries to match — Once the Tjugo has reached the shores of North America, there’s just one more thing you’ll need: batteries. Any rechargeable AA or AAA batteries will do the trick, but you might as well grab a pack or two of Ikea’s Ladaa batteries while you’re already shopping there.

And yes, the batteries are available in that earthy green to match the Tjugo charger.

Whatcha reading? — Rechargeable batteries have been around for decades, but this is the first charger we’ve seen that doesn’t essentially look like a pile of wires and plastic when not in use. Leave it to Ikea to balance functionality with aesthetics in one of the least-pleasing electronic devices known to mankind.

The expanded line of batteries and the new Tjugo charger both fit neatly into Ikea’s vision of a sustainable future as well. Though many modern electronics do come with rechargeable batteries, battery waste is still a huge issue around the world. Making AA and AAA batteries a little more appealing to customers is a very easy way to move toward a greener future.

It’s unclear when (or if) the Tjugo charger will be available in the U.S. If you happen to be in Australia in the near future, would you grab us a few of these fake books, please?