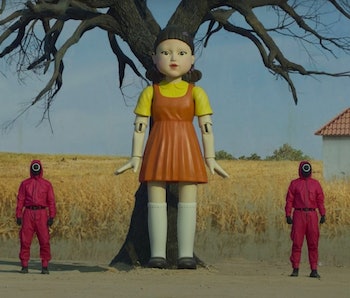 A South Korean internet provider is suing Netflix for being too popular. The streaming company’s latest viral hit Squid Game, a gruesome Battle Royale-style drama created in South Korea, has drawn so many concurrent streams in the country that SK Broadband wants Netflix to pay for the surge.

As evidence for the suit, SK Broadband presented a jaw-dropping statistic: Netflix data traffic handled by the internet provider jumped more than 24 times between May 2018 and September 2021. SK says its broadband networks carried just 50 gigabits per second (Gbps) of Netflix content in early 2018, while that number has now grown to about 1,200Gbps.

In response to the lawsuit, Netflix said it would review SK Broadband’s reasoning and “seek dialogue” to explore how it could work with the internet provider to ensure customers’ internet access isn’t affected by the extra traffic. For Netflix users in the Western world, the idea that the streaming giant would have to pay for the data its users create might sound absurd. South Korea’s government sees the situation a little differently.

No net neutrality — SK Broadband’s lawsuit has a genuine legal basis. Last year, lawmakers in South Korea passed an amendment to its Telecommunications Business Act that pushes global content providers to help with network maintenance. That amendment makes it legal for SK to ask Netflix for compensation.

As you might expect, Netflix did not take to this new amendment kindly. The company filed its own lawsuit with the South Korean court system to argue that its obligations ended at creating content and opening it to users. Netflix’s suit attempted to explain that maintaining internet service for high data usage should be part of the internet provider’s contractual obligations to users — but South Korea’s court system ruled against Netflix in June. Seoul’s Central District Court said it would be “reasonable” for Netflix to provide compensation for the service SK Broadband provides it.

Netflix says it’s done enough — Though Netflix has essentially already lost this exact legal battle once before, the streaming company isn’t ready to simply acquiesce to SK Broadband’s renewed demands. Netflix has taken a new approach to its legal defense this time around.

The company released a statement this week about the significant investments it’s made in the South Korean economy. Netflix says it’s created about 16,000 jobs by contributing 770 billion won ($651 million) to creating original content in the country, leading to a cumulative economic uptick of approximately 5.6 trillion won ($4.7 billion).

From an outsider’s perspective, this argument does seem to make some sense. But South Korea has made its position clear on the matter — it’s unlikely the country’s courts will renege on their previous ruling. New proceedings will start in December.