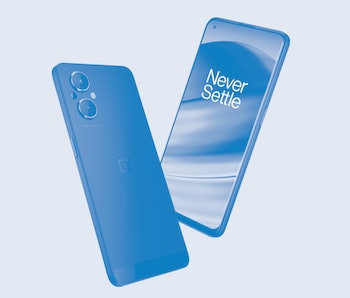 Looks like you have to settle sometimes. The U.S. will be getting OnePlus’ upcoming mid-range Nord N20 with one major display catch: they’re 60Hz.

OnePlus revealed to PCMag that the flat-edged Nord N20 will have 60Hz AMOLED displays that should offer better contrast and richer colors than its past Nord phones, even if the refresh rate is lower. The company’s COO Kinder Liu “strongly implied” that it was between 60Hz AMOLED or 90Hz LCD displays at the price point, according to PCMag.

Unconfirmed specs — In addition to the first image of the Nord N20, OnePlus also confirmed to PCMag the phone’s 6.43-inch screen with FHD+ resolution. Liu told PCMag that the smartphone will support SuperVOOC fast charging, though stopped short on specifics.

There are still a number of rumored specs that OnePlus hasn’t addressed like the Snapdragon 695 chip, 6GB of RAM, and 128GB of internal storage. The camera is rumored to be a 48-megapixel main camera, along with an 8-megapixel ultrawide camera. The Nord N20 is rumored to run OxygenOS 11, instead of the more recent OxygenOS 12 that launched on the OnePlus 10 Pro.

Launching soon — The Nord N20 is due to make its debut later this month, but there are still no details on pricing. For comparison, the previous Nord N10 went for $299 and the global Nord 2 sold for about 399 euros, or around $430. We also don’t know carriers — T-Mobile and MetroPCS are potentials since OnePlus has partnered with them on past Nords phones.

It is nice that OnePlus is releasing an AMOLED display on a mid-range phone that’s under $500, especially when you consider there aren’t many alternatives. Samsung is the only competitor in this price range with its global version of the Galaxy A33 which has a 90Hz AMOLED screen. But there’s no guarantee that the U.S. version will have the same display. As a mid-range device, there are certain trade-offs that have to be made, and that just happens to be a 90Hz AMOLED screen for the Nord N20. Hopefully, there aren’t any other deal-breaking features that get cut in the U.S. version.