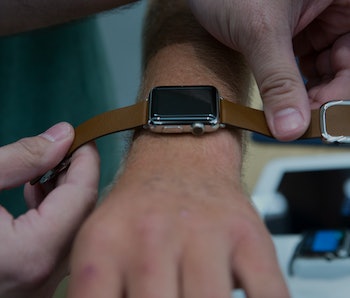 Apple is reportedly developing an Apple Watch that features a fingerprint sensor on the Digital Crown. Such an addition would allow the Apple Watch to support Touch ID for unlocking and for authenticating purchases — and maybe, finally become independent of the iPhone. Maybe.

Right now the Apple Watch can be unlocked by typing in a passcode on the screen or unlocking the iPhone to which the Watch is paired. But the LTE version of the Apple Watch doesn't need to be near an iPhone to function, and for it to truly be independent of the iPhone you'd presumably want an easier way to unlock it than punching a code into that small screen.

Admittedly adding Touch ID doesn't seem like a hugely necessary change on its face. After all, once the Apple Watch is on your wrist and unlocked it will stay unlocked until you remove it from your arm. But Touch ID is also more secure than a four or six-digit PIN number; if you're using Apple Pay on the Watch you'd want the best security.

The LTE version is also just sort of begging for more independence than it has now. Sure, you can leave your house with the cellular Apple Watch and no phone, but it's still a pretty limited experience and certain functions require the use of an iPhone.

If Apple is really bringing Touch ID to the Watch it suggests the company is at least considering ways to improve the experience of using an Apple Watch sans-iPhone. Heck, maybe then Android users will be able to get in on the fun! It'd certainly expand the total addressable market for the Apple Watch, something that would be helpful to Apple as growth in the iPhone business slows.